Can Southwark firms set up 100 apprenticeships in 100 days?

A campaign has been launched to place '100 apprentices in 100 days' in Southwark workplaces. 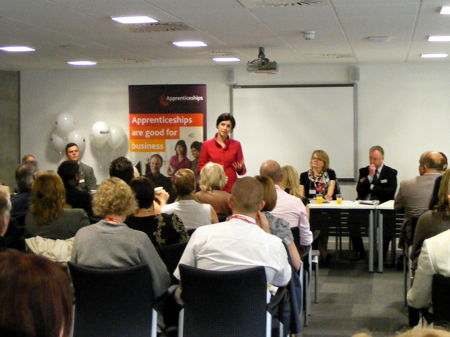 Looking at the prospects for the coming 15 weeks, Cllr McDonald said that a 100-day deadline had recently been met in the West Country where she had looked at a similar project.

"You do not have to do the A level route to get into higher education," said Vic Grimes representing the National Apprenticeships Service. "You can do it through apprenticeships."

Lykke Leszczynski, Director of Business & Corporate Services at WPF Therapy in nearby Magdalen Street, spoke about her organisation's support.

Kevin Quinn, joint managing director of Southwark News which is backing the initiative, stressed the ideal of local people having training for local work.

Southwark Council is promising 37 opportunities towards the 100 total. Guy's & St Thomas' NHS Foundation Trust and Veolia have also pledged to take on apprentices.

Further information is available on www.apprenticeships.org.uk