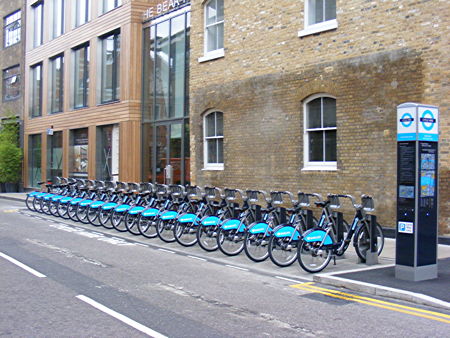 Transport for London's managing director of surface transport David Brown confirmed this week that docking points for 350 bicycles will be installed at Waterloo Station by November.

Speaking at City Hall during a meeting of the London Assembly's transport committee, Mr Brown said that TfL had reached a deal with Network Rail to provide docking points within the station to meet demand from commuters but said there was no scope for further expansion of the cycle hire capacity at Waterloo in future.

Details of the rest of the proposed locations were revealed by Transport for London in response to questions posed by members of the Boris Bikes forum.

New docking stations are to be provided in King Edward Walk close to Morley College and on Westminster Bridge Road by St Thomas' Hospital. These locations already have planning permission from Lambeth Council.

New planning applications will be submitted for docking stations at the Waterloo roundabout and the Fire Brigade Pier on Albert Embankment.

A proposed docking station close to Southwark Underground Station will fill in one of the largest gaps in the cycle hire scheme south of the river and is also likely to prove popular with TfL staff based at Palestra on Blackfriars Road.

TfL has revealed that it is to seek permission to expand five other SE1 docking stations, including the Bankside Mix and Hop Exchange locations in Southwark Street and the sites at either end of Baylis Road in Waterloo. There are also plans to increase capacity at the New Globe Walk docking station on Bankside.

TfL's list makes no reference to the Hopton Street docking station which appeared on the printed maps sent to Barclays Cycle Hire members.

This location received planning permission from Southwark Council but requires archaeological excavation because of the proposed docking station's proximity to the presumed site of the Swan Theatre.

An indication of the future expansion of the scheme is provided by Transport for London's response to Berkeley Homes' planning application for the One Tower Bridge development at Potters Fields.

TfL has asked the developer to provide Ł195,000 for a docking station with approximately 25 docking points.