Members of the House of Lords have criticised the Government for spending £30 million on the proposed Garden Bridge across the Thames between South Bank and Victoria Embankment. 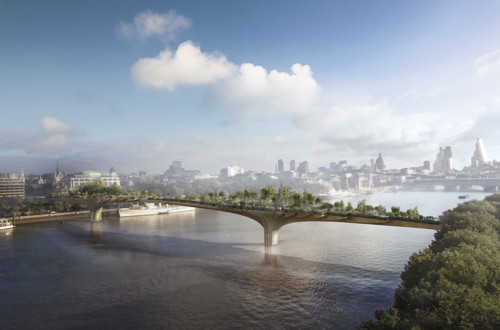 The Ł150 million scheme has also been backed by Mayor of London Boris Johnson who has committed Ł4 million of Transport for London cash to the planning process.

At question time in the House of Lords on Thursday retired judge Lord Lloyd of Berwick asked Treasury minister Lord Deighton: "First, does he agree that there is no real need for another crossing on this part of the Thames, seeing that there are already two pedestrian bridges within half a mile of the proposed bridge, on either side, not to mention Waterloo Bridge and Blackfriars Bridge?

"Secondly, supposing that there is a need for another crossing, why not have a simple bridge, such as the Millennium Bridge between St Paul's and Tate Modern, at a fraction of the Ł150 million cost?

"Why waste Ł30 million of public money on creating the so-called Garden Bridge?"

Lord Deighton replied that the Government's proposed Ł30 million contribution "...recognises the benefit that the new transport connections will bring to the UK by stimulating development on both sides of the river while reinforcing London's position as a global visitor destination and creative hub.

"However, the support will be provided only once the Government have received a business case produced in line with standard guidance to demonstrate that the investment represents value for money for the taxpayer."

Lord Lloyd added: "Why try to plant trees on a bridge, where they will be exposed to all the elements, will be a hazard to river craft once they are fully grown and will, in my view at any rate, look completely ridiculous?"

Lord Deighton replied: "The key to the Garden Bridge is that it will be two things for the price of one; it will be a garden and a bridge, and will combine the benefits of both."

Lib Dem peer Baroness Garden of Frognal raised concerns about the ongoing maintenance costs of the bridge to which Lord Deighton replied: "The initial plan for maintenance is that it will be assumed by Transport for London along with its ongoing maintenance responsibilities around London.

"Of course, if, as part of the capital fundraising campaign, the Garden Bridge Trust can also persuade somebody to take on the ongoing maintenance responsibilities, that would be particularly welcome."

Labour's Lord Davies of Oldham was scathing about the proposals: "It is a very expensive piece of public art, a vanity project of the mayor – and we know where his vanity projects have gone and what they have cost the country," he said.

"The cycle hire scheme is in trouble, his Emirates gondola crossing down at Greenwich carries so few passengers that it is risible, and, of course, the taxpayer will have to pick up the bill."

Lord Deighton insisted that the bridge proposal had numerous benefits: "First, there is the pedestrian connectivity that it will give. It will switch people out of cars and on to their feet and make a very important connection.

"Secondly, it will increase London visitor numbers, which is very important. It will be a great visitor attraction.

"Thirdly, it will have significant development value, connecting the South Bank and its creative centre to the Aldwych and Covent Garden.

"The development it will bring on each side will have significant value.

"Finally, it will be a great showcase for UK expertise. Our brilliant designer, Thomas Heatherwick, is designing it, Arup is engineering it and Dan Pearson is landscaping the garden, so it will generate other future business for London through that showcase."

Labour's Baroness McIntosh of Hudnall thought the controversy would blow over. She said: "My Lords, does the Minister agree that Bernard Shaw was right when he said, nearly a century ago, that on the whole the British never want anything?

"They particularly did not want, for example, the National Theatre. They got it and are now very proud of it. The same thing is true of the London Eye. Does he not agree that the same thing, in time, may be true of the Garden Bridge?"