Plans to extend the Barclays Cycle Hire docking station at Bankside Mix have been criticised by IPC Media, owner of the Blue Fin Building, amid fears that the extra docks will make it too hard for staff to cross the road or hail a taxi. 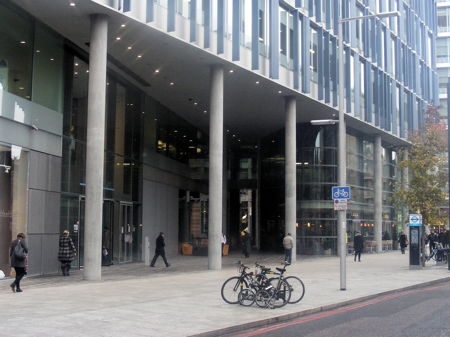 When the Barclays Cycle Hire scheme launched at the end of July the Bankside Mix docking station outside the Blue Fin Building in Southwark Street immediately proved to be one of the most popular in the whole network.

The docking station currently has 33 docking points and in October Transport for London applied to Southwark Council to add an extra 27 points to bring the total number of spaces to 60.

TfL says that the additional docking points "will help to meet demand for the scheme and improve the natural distribution of the bicycles within the network".

The extra docking points will stretch across the main entrance to the Blue Fin Building towards the corner of Sumner Street.

Now IPC Media's facilities director Jenny Noon has written to Southwark Council to "object in the strongest possible terms to this restriction of the ability of our staff to access our building without having to be herded around a lengthy bicycle park".

She notes that the magazine company objected to the original installation of the docking station on the grounds that "they posed an impenetrable barrier outside our building for those 4,000 or so occupants wishing to cross the street or hail a taxi".

She adds: "We support the bicycle scheme in principle but object to the clumsy way the docking stations have been planned into the streetscape."

IPC Media has asked Transport for London to consider placing the extra docking points on another street in the locality.

Alex Wraight of Allies and Morrison, the architects of the Blue Fin Building, has also written to the council.

"While we accept that the current installation is not intrusive, we would be concerned that the proposed extension will extend across the front door of the Blue Fin Building potentially inhibiting access, particularly vehicle drop-offs/pick-ups," he says.

Last week the Barclays Cycle Hire scheme was opened up for casual users. It is now possible to hire a bicycle from the touch-screen terminals at each docking station without first acquiring a key from Transport for London.

TfL has also applied to increase the size of the New Globe Walk docking station from 19 to 33 docking points.

A 124-space docking station at Waterloo Station is currently under construction.