If you've been for a stroll along the South Bank in the past few days you might have noticed two large illuminated Christmas trees on a barge in the middle of the river near the London Television Centre. 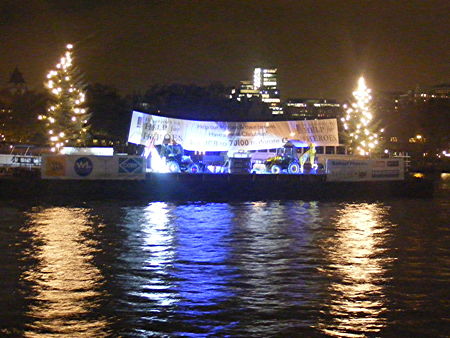 The Christmas-themed 200ft barge, featuring the two giant Christmas trees and a line up of JCB diggers, is part of a fundraising initiative for the Help for Heroes charity that supports wounded armed forces personnel.

The barge features a banner inviting passers-by to donate by text message (Text JCB to 70100 to give Ł5).

To boost the fundraising, JCB hopes to raise more than Ł100,000 by auctioning one of its classic diggers with a bucket loader on the front and an excavator on the rear.

"We at Help for Heroes (H4H) are thrilled that JCB has decided to auction their exclusive Union Jack digger to raise money for the charity," says Bryn Parry, CEO & co-founder, Help for Heroes.

"The money raised from the auction of this piece of history will provide much needed funds to help our wounded heroes on their road to recovery.

"JCB has been a long term supporter of the armed forces and of H4H – the digger was on display at the Heroes Concert back in September. We would like to say a big thank you to everyone at JCB for this amazing donation."

The auction opened on Wednesday 8 December and closes on 21 December. Details at www.jcb.com/auction/helpforheroes