Southwark Cathedral's programme of events to mark the centenary of the start of World War I began last week with the launch of a reprint of a key book. 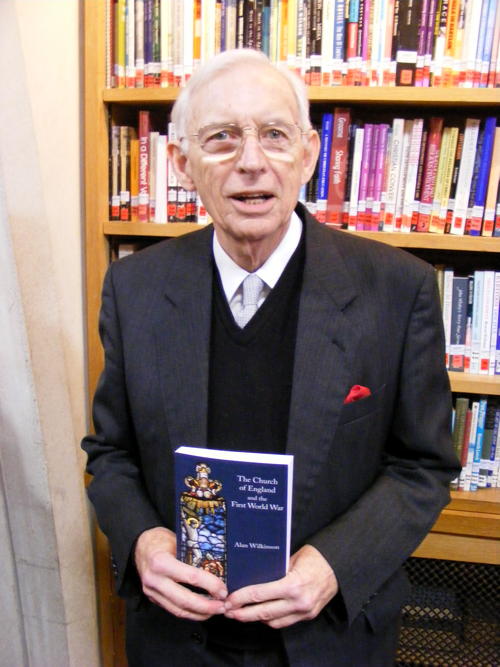 Canon Alan Wilkinson with a copy of his book

Guests gathered in the Garry Weston Library on Thursday night for the launch of a reprint of The Church of England and The First World War by Canon Alan Wilkinson.

This book, first published in 1978, has been described as 'the leading published work on the subject' and explores in depth the role of the church during the tragic circumstances of the First World War using biographies, newspapers, magazines, letters, poetry and other sources.

Alan Wilkinson demonstrates the sheer horror, moral ambiguity, and the interaction between religion, the church and war.

Canon Alan Wilkinson was Chaplain of St Catherine's College Cambridge and Principal of Chichester Theological College. Since 1988 he has been an honorary priest at the Portsmouth Cathedral. He has written extensively on the interaction between church and society in the twentieth century.

Other First World War commemorative events at Southwark Cathedral include joining in the national Candlelit Vigil on Monday 4 August at 11pm which marks 'the lights going out across Europe' and the centenary of the start of the conflict.

Among musical events are a Dulwich College Choral Concert which includes Elgar's 'The Spirit of England' and 'The Lark Ascending' by Vaughan Williams on Friday 28 March.

In November there will be a concert in aid of Help for Heroes when the music will be interspersed with spoken extracts from the front line war diaries of the Revd William Charles Campling (1887-1973) who was one Southwark's honorary canons.