Shell has announced that it is working with the man who painted the Elephant & Castle Shopping Centre pink in the early 1990s on new plans to open a three-year visitor attraction on some of its vacant land on the South Bank. 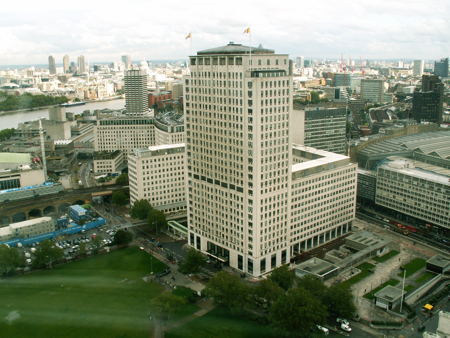 It is not yet clear whether the proposed attraction will take the form of a market or a series of retail units.

"We want to use the space to complement the diverse activities offered by our neighbours by creating small business opportunities and a fun place for Londoners and tourists alike to visit," said Jamie Walls, VP Communications for Shell in the UK.

The 4,000 m2 space will be available for around three years while the plans for the wider redevelopment of the Shell Centre site are finalised.

Urban Space Management is working on the scheme which will be submitted to Lambeth Council as a planning application in the next few months.

"I think this is a fantastic opportunity for USM to use this temporarily available space to really add some exciting colour to this part of the South Bank,"says Eric Reynolds, chief executive of Urban Space Management.

Mr Reynolds was responsible for reviving the fortunes of the Elephant & Castle Shopping Centre in the 1990s when he advised the owners to paint the building a shocking shade of pink.

USM's other projects include the Elephant & Castle Market and Greenwich Market.

Six years ago Mr Reynolds suggested that the London Eye should be relocated to SE10.

This temporary attraction is separate to Shell's ongoing selection process for a developer for the whole Shell Centre site.

Shell will continue to occupy the tower and proposes to take an additional 210,000 sqft of accommodation in the redeveloped scheme.