A petition calling for better safety training for lorry drivers in the capital has been delivered to City Hall by members of the London Cycling Campaign. 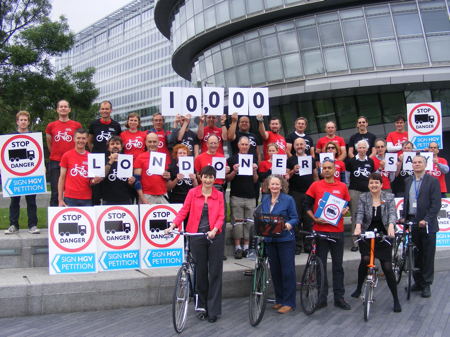 The 10,000-signature petition was presented to London Assembly members representing the four major parties on Wednesday morning and will be handed to Mayor of London Boris Johnson by his 'cycling advocate' Andrew Boff AM.

The London Cycling Campaign, which is based in Bermondsey, launched the 'No More Lethal Lorries' campaign after a spate of collisions between cyclists and heavy goods vehicles.

Several such collisions have taken place on SE1's streets. 20-year-old David Poblet died in a collision at the junction of Tooley Street, Jamaica Road and Tanner Street in March.

In the past two years cyclists Meryem Ozekman, Professor David Vilaseca and Muhammed Haris Ahmed all died after collisions with lorries whilst cycling in SE1.

Dr Ashok Sinha, chief executive of the London Cycling Campaign, said: "Cyclists and other road users have supported our petition for lorry driver training in huge numbers – we trust that politicians in every London council as well the Mayor now respond to this call for action."

"Cycling in London needs to be made far safer," says Caroline Pidgeon AM.

"More than one cyclist a month dies on London's roads – that is a shocking figure and is unacceptable. The Mayor is always talking about promoting cycling but the harsh fact it that much more needs to be done to tackle the dangers facing cyclists."

Val Shawcross AM added: "I support the campaign to provide lorry drivers with cyclist awareness training as it has proved to be hugely successful in my constituency. I think it would be a step forward if other boroughs got involved, as it would reduce road danger to vulnerable users."