The London Cycling Campaign has urged its members to object to Transport for London's plans to remodel the Elephant & Castle junction. 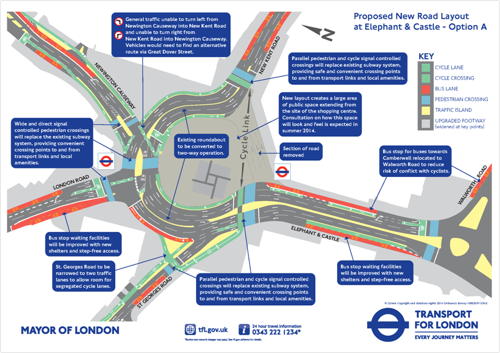 Transport for London this week held two public exhibitions of its plans to remove the roundabout and its public consultation continues until 30 April.

TfL is asking the public to comment on two options for the arrangement of the northbound bus stops and cycle lane outside the Metropolitan Tabernacle. Option A puts cyclists between the buses and the general traffic lane, whilst option B includes a segregated cycle lane to the west of the bus stops.

Now the London Cycling Campaign – a 12,000-member organisation – is encouraging its supporters to write to TfL demanding a rethink.

LCC says: "Northbound: cycling journeys are likely to be extremely dangerous (option A) or extremely inconvenient (option B). With the potential for serious collisions between turning motor traffic and people on bicycles (option A) and less dangerous but still highly undesirable conflicts with bus passengers and pedestrians (option B).

"Southbound: the lack of protected space allowing safe passage past the link road is a serious failing, creating serious unacceptable risk of collisions with many buses and other motor vehicles."

A more detailed critique of the proposals is available on the LCC website.

Meanwhile local campaigners led by Richard and Lyla Reynolds have drawn up an alternative plan for the junction which will soon be published at www.elephantandcastleroundabout.org

The 'Say No to the Bodge' and 'Save our Subways' campaigners argue that TfL's proposals will increase journey times for both pedestrians and road users.

• TfL's plans are due to be exhibited at John Harvard Library until the end of April.

What do you think of the plans for the junction?