The Queen was represented by her domestic chaplain Prebendary Bill Scott at a memorial service for Dean of Southwark Colin Slee at Southwark Cathedral. 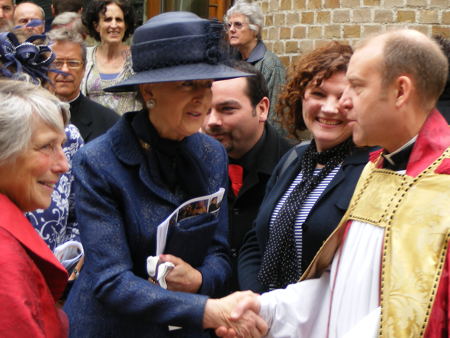 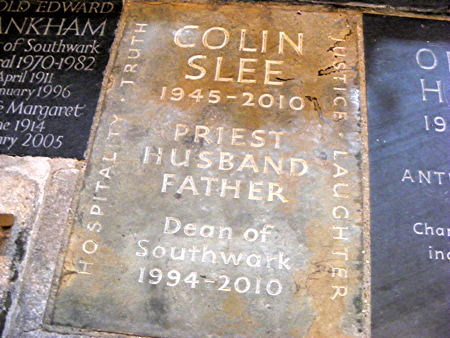 Also present at the Saturday morning service was Princess Alexandra, patron of the homelessness charity Crisis of which Colin Slee was a trustee.

Tributes were paid to the dean, who died seven months ago, based on four words on his tomb in the cathedral's retrochoir: Laughter, truth, justice and hospitality.

Torsten Pope, wearing his boat club blazer to speak of laughter, recalled a young Colin as his rowing coach who led carol singing outside a strip club in Soho.

St Martin-in-the-Fields vicar Nicholas Holtham, shortly to be enthroned as Bishop of Salisbury, recalled that Colin always insisted on calling his church the 'Southwark cathedral of the north bank'.

Edith Slee spoke of her husband's hospitality which involved all the family.

"Colin was determined that Southwark Cathedral should be part of, not swamped by, south bank regeneration," she observed.

The sermon was preached by Dr Barney Pityana, one of Colin Slee's students at King's College London, who spoke of his "enormous and inimitable presence" in the same pulpit.

Guardian journalist Steve Bates, whilst leading prayers, said: "Colin was a friend and contact to many journalists, including those whose viewpoint was not his own. He believed in openness, frankness and speaking with integrity." Prayers were also said by friend and Waterloo resident Canon Bill Ritson.

The service began with a procession of people representing Colin Slee's varied work and interests as the choir sang Parry's I was glad.

Hymns included John Bunyan's He who would valiant be and Come down, O Love divine.

"There are so many reminders of Colin around us," said acting dean Canon Andrew Nunn in his welcome. "A huge flag flying on the clean tower, the Millennium buildings on the north side, the girls' choir singing, the organ scholar playing at this service, this raised tower space in front of us, the map of Zimbabwe and the chairs you are sitting on."

The large congregation included the Mayor of Southwark Lorraine Lauder, Dean of St Albans Jeffrey John who had preached at the funeral last December, John Constable whose Southwark Mysteries production was staged in the cathedral a year ago and Simon Hughes MP.

Afterwards, in the spirit of the Dean's hospitality, the nave was cleared of chairs for a reception during which Pimm's, miniature quiches and chocolate brownies were served.