A stained glass window to commemorate the Queen's Diamond Jubilee has been installed at Southwark Cathedral. 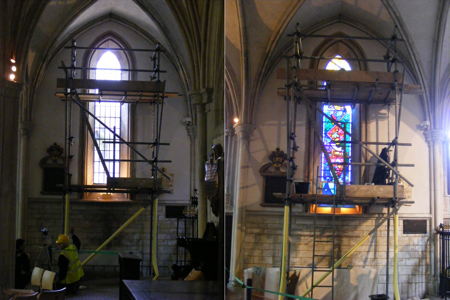 Before and after: The plain glass before removal on Tuesday and the new stained glass window on Wednesday 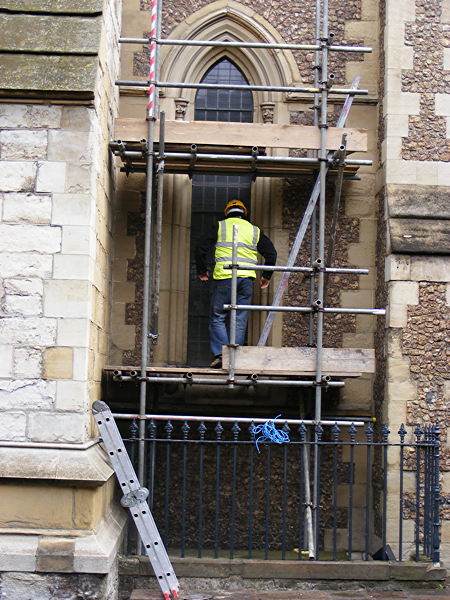 Work in progress outside the cathedral

The window has been installed in the retrochoir at the eastern end of the cathedral and replaces plain glass that was installed after bomb damage in the Second World War.

"When the Blitz was over, and windows that had been blown out were replaced with cardboard or plywood, the smoke from the steam trains passing the cathedral every few minutes somehow penetrated into the cathedral," recalled the late Canon Eric James who was a regular visitor to the building during the war.

"So, too, did the sound of the trains. It was as though they came in at one end of the cathedral and went out at the other!"

It was during a dinner at Glaziers Hall in early 2010 that the late Dean of Southwark, the Very Revd Colin Slee, raised with the then Master Glazier, Sir John Stuttard, the possibility of a Diamond Jubilee window for Southwark Cathedral.

The trustees of the Glaziers Trust offered to fund the project and a competition was organised by the Glaziers Company to find an artist to carry out the work.

The commission was awarded to Leifur Breidfjord, an Icelandic artist based in Reykjavik who is a Fellow of the British Society of Master Glass Painters.

The current Dean of Southwark, Very Revd Andrew Nunn, travelled to Reykjavik earlier this year to meet the artist in his studio and see the work in progress.

"By providing the funds for the gift the trust has given the Worshipful Company of Glaziers the opportunity to provide a lasting tribute to Her Majesty that can be appreciated and admired for generations to come."

The new window will be blessed and dedicated by the Bishop of Southwark, Rt Revd Christopher Chessun, during a service of Choral Evensong on Sunday 3 June – shortly after the Thames Diamond Jubilee Pageant has passed the cathedral.

• On Thursday 7 June at 7pm the cathedral will host Southwark's Civic Service to celebrate the Diamond Jubilee. Organised jointly by Southwark Council and the Diocese of Southwark, the service will be attended by Princess Alexandra. All are welcome