The three-month project to repaint Elephant & Castle Shopping Centre has now been completed. 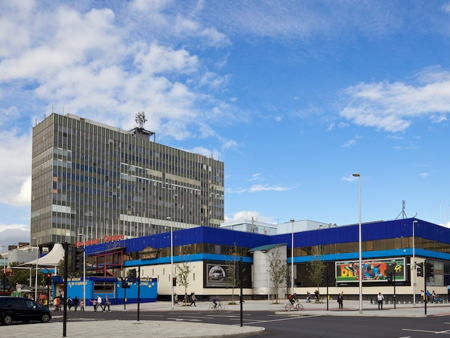 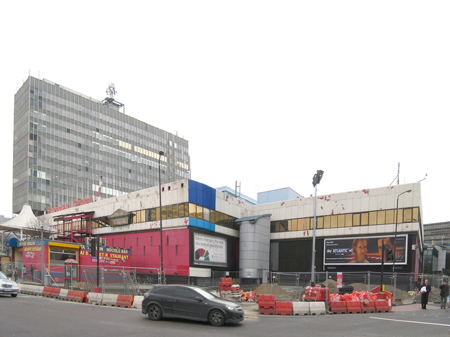 How the centre looked earlier this year

The shopping centre is owned by KPI, a joint venture between St Modwen and Salhia Real Estate.

In July KPI announced plans to repaint the shopping centre in two shades of blue to replace the faded and peeling red and cream scheme.

St Modwen says that it is aware of the white marks that have already appeared on the new paintwork and "will be managing them as part of the ongoing maintenance of the shopping centre".

The shopping centre has sported a variety of colour schemes during its 46-year history. Most famously it was painted bright pink in the late 1990s on the advice of Eric Reynolds of Urban Space Management who was called in by the building's then owners to revive the fortunes of the failing complex.

"As the proposed comprehensive transformation of the centre is unlikely to commence before 2015, it is important to continue to invest in the current shopping centre for the benefit of our tenants and customers," says James Stockdale, development surveyor at St Modwen.

"We are committed to maintaining this popular shopping destination in the years leading up to its redevelopment."

In the new year KPI is expected to launch a wider consultation on its long-term plans for the centre which it says will "secure dramatically improved shopping and leisure facilities together with substantially enhanced public realm and new homes".

The proposed redevelopment falls short of the outright demolition of the centre previously envisaged by Southwark Council's regeneration plans for Elephant & Castle.

Instead, St Modwen says that it will transform the centre "through a combination of significant new buildings and extensive refurbishment".

Two concept designs for the new-look centre were released by St Modwen in June.

Earlier this month St Modwen's Tim Seddon told a meeting of Walworth Community Council that the company is considering converting Hannibal House, currently an office building, for residential use.