Deputy Mayor of London Richard Barnes visited Elephant & Castle on Thursday night to address a public meeting organised by the Latin American community to discuss concerns about the regeneration of the area. 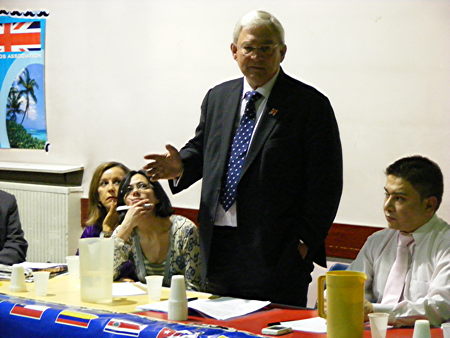 The meeting at Crossway United Reformed Church in New Kent Road heard from Dr Patria Roman-Velazquez of City University who has researched the Latin American community at the Elephant & Castle and the clusters of Latin American businesses at the shopping centre, Elephant Road, Newington Butts and elsewhere.

"They are not just selling products ... but they are part of a social network and a support network for Latin Americans living in London," she said.

"This presence is under threat," warned Dr Roman-Velazquez.

She added: "Latin American businesses, once located in an area that had an economically marginal position, are now very much at the centre of a regeneration scheme that will see the area economically integrated into central London.

"Those changes are of concern for Latin American businesses and they raise a number of questions about their position and their involvement with the regeneration plans."

She went on to set out a range of concerns about the likely influx of chain stores, rent rises and the costs of relocation during the refurbishment of the shopping centre.

Richard Barnes, Conservative London Assembly member and Deputy Mayor of London, set aside his prepared speech to respond to what he had heard.

"I cannot offer you any instant solutions," he said.

"I do not take planning decisions in the Mayor's office. I do not sit on planning committees in Southwark and I am not a director of St Modwen [owners of the shopping centre], although I do know the directors of [Heygate Estate developer] Lend Lease...

"So I have no power over this. What I can promise you is that I will take all of the messages back from this meeting and ensure that the Mayor of London knows where you are coming from.

"I have never believed that a new building is 'regeneration'. It is a new building. What happens within that building, in the community and environment around it, and the way in which it brings people together – that is regeneration.

"If you simply knock down down a building and put a new one up, having taken everybody out, then it's starting from scratch. You have destroyed a community rather than creating a new one.

"People's perception of the Elephant & Castle is that it is a mess. Something needs to happen there.

"I come as a visitor; I don't live in the area. But I come out of the tube station and I stand on the pavement and the only thing I know is I am at the Elephant & Castle.

"I haven't got a clue which way to go. In fact, I walked the wrong way towards Walworth Road rather than this way to get to here [in New Kent Road].

"Something needs to be done there. It needs refurbishment and it needs bringing into the 21st century. It needs a lot of work."

Mr Barnes acknowledged that Latin American businesses have contributed to the vibrancy of the shopping centre in recent years.

"I think we have got to recognise what you have achieved and try to identify ways in which that achievement can be carried forward," he said.

"I can't believe that there are first and second-tier [retailers] – such as Debenhams, Marks & Spencer and whoever else – who are queuing up to take over large spaces in the refurbished Elephant & Castle. That will perhaps come with time as its economic vibrancy is sustained and it is rebuilt.

"It is the traders who are there who can sustain that economic community and attract people in there.

"What draws the Debenhams, Marks & Spencer and BHSes of this world is people with money in their pockets who are going to a specific space to spend that money.

He added: "I cannot promise you that we will be wholly and totally successful, but I can promise that we will endeavour to make your voice heard."