Grange ward councillor Mark Gettleson has written to local residents calling for the introduction of a saturation policy for new pubs, bars and restaurants in Bermondsey Street. 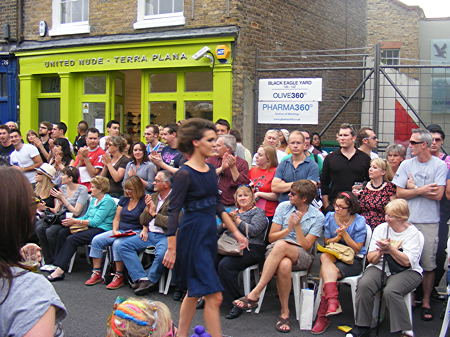 The proposal follows concerns from some local residents about the prospect of a new restaurant and bar called Mainray House opening in the former Terra Plana shoe shop.

An action group has been formed by residents who say that the there are already "extremely high levels of disturbance" associated with the nine existing licenced premises on Bermondsey Street and more food and drink establishments will make matters worse.

Members of the group include actor Rory Kinnear and artist Norman Ackroyd RA.

Planning permission for the change of use of the former shoe shop was granted in the summer but a licensing application is still pending.

Objectors attended the licensing sub-committee hearing at Southwark Town Hall at the end of of August where they convinced councillors that interested parties had not been given enough time to object and were granted a further 28 day consultation period which ended last week.

"Most of the licensed premises are confined to the top or the bottom of the street – but this new one lies right in the very heart of Bermondsey Street, opposite Tanner Street Park – which is very much our 'village green'," explains local resident Sarah Wyndham Lewis.

"We are a strong and united community, with an increasing number of young families with babies moving into the area.

"We all chose this area to live in because we love the buzz which comes from the mixed use Balance of shops, hairdressers, florists etc. and our great eating/drinking venues. But this latest bar application threatens to tip that balance.

"We cannot live with further increase in the number of people blocking the pavements outside licensed premises during opening hours and emptying out onto the street late at night with shouting, fighting, vomiting, broken glass, and general anti-social behaviour.

"Much of this also spills over into adjacent streets and into Tanner Street Park; the focal point for family and community life in the area.

"We don't want to become like Soho or Covent Garden, a drinking destination over-run by stag and hen nights and bar 'tourists' ... and we have to act now to protect the character of our much-loved street if we want to prevent this happening."

Last month Grange ward Liberal Democrat councillor Mark Gettleson wrote to Bermondsey Street residents inviting them to sign a petition calling on the council to change its planning and licensing policies to make it more difficult for new bars to open.

"Bermondsey Street must urgently become a zone of 'protected shopping frontages', making it far more difficult for inappropriate changes of use to occur," said Cllr Gettleson.

"We need to lobby the council to make that change and ensure that it's enshrined within the new 'neighbourhood plan' for the area. We should all get involved in the creation of that plan.

"A 'saturation zone' for licensed premises must also be introduced on Bermondsey Street, allowing the licensing committee to control the number of venues serving alcohol on the street.

"These are introduced by licensing through working together with the local police and based on crime and disorder statistics. I don't see why crime should have to rise here before we get a 'saturation zone'."