Mayor of London Boris Johnson visited Jubilee Gardens on Tuesday afternoon for a ceremony to mark the start of work on the park's multi-million pound makeover. 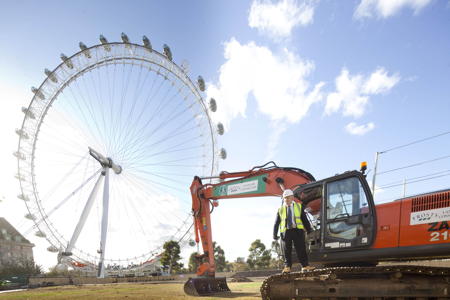 The Mayor of London at Jubilee Gardens 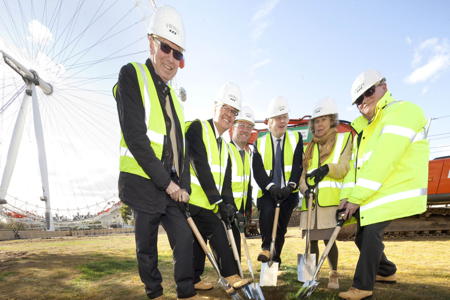 Hoarding were erected around the gardens a month ago and now work is beginning in earnest.

The Mayor of London has contributed Ł1.5 million through Transport for London to ensure that the South Bank looks its best for the Queen's Diamond Jubilee celebrations and the 2012 Olympics.

The Balance of funding for project is made up of section 106 contributions from Shell and the EDF Energy London Eye via Lambeth Council and from charitable trusts.

"In 2012 London will throw open its doors and welcome the world to not only the greatest sporting event on the planet but also to one of the biggest parties this city has ever seen – the Queen's Diamond Jubilee," said Boris Johnson.

"So it is fantastic to see this previously uninspiring and unloved corner of the capital being transformed into an oasis worthy of royalty in time for the celebrations.

"The new gardens will be accessible to all and make London's South Bank even more attractive, ensuring its position on the ever growing list of green spaces visitors and Londoners alike can now enjoy in the capital."

The gardens were laid out for the Queen's Silver Jubilee in 1977 but have become run-down and neglected. A series of financial and legal problems has prevented work from getting under way sooner.

New, lush green landscape with 70 new trees and flowerbeds of the highest quality will replace the existing flat and featureless garden with new paths, extensive seating, and new lighting. The design is by Dutch landscape architects West 8 and the works are being carried out by Frosts Landscape Construction.

Work is due for completion in mid-May 2012, just in time for the Queen's Diamond Jubilee celebrations.

"This is a really exciting moment for Lambeth and for London as this project will make Jubilee Gardens one of London's truly great green spaces, to be enjoyed by local residents and visitors from across the world," says Cllr Steve Reed, leader of Lambeth Council.

"Over the last few years we have transformed our local area, including schemes in The Cut, Windrush Square, and Lower Marsh. The Jubilee Gardens scheme will be a fantastic addition and a focus for media during the 2012 games."

Ted Inman added: "This groundbreaking event is a very significant one for Jubilee Gardens trustees, who have been working for a new Jubilee Gardens for many years. We are delighted this new green landmark will be ready for the Diamond Jubilee and are committed to maintaining the gardens to the highest standards thereafter."