Kate Chisholm visited Bankside on Thursday to celebrate the publication of her book on Samuel Johnson and women. 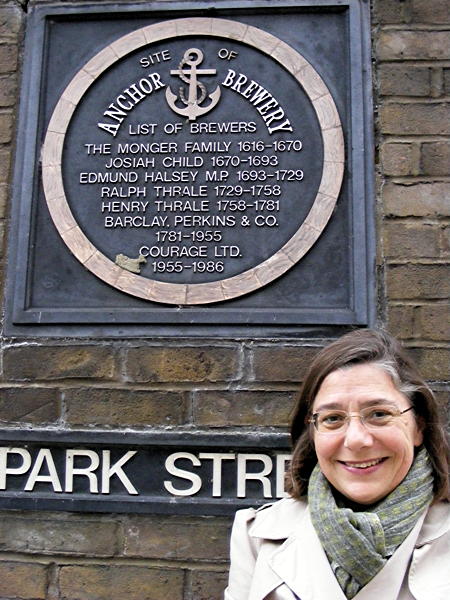 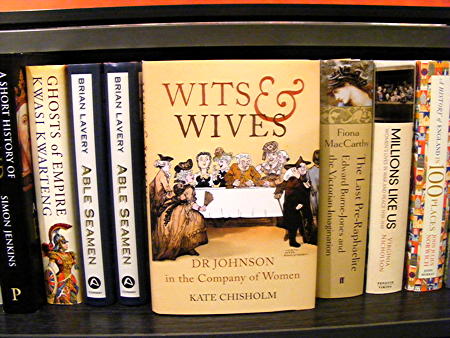 Wits & Wives on sale at the Riverside Bookshop in Hay's Galleria

Wits & Wives: Dr Johnson in the Company of Women looks at Samuel Johnson's relationships with a number of unusual women and the author's walk around the area highlighted his close assocation with two who lived in Southwark.

Borough and Bankside is also a recent home to Kate Chisholm who wrote much of the book at a flat near Blackfriars Bridge. She began her return visit at Southwark Cathedral where Johnson is depicted in a stained glass window.

When Kate used to worship there on Sundays she would walk along Park Street and past a plaque which inspired her to begin the book.

The plaque marks the site of the brewery run by Johnson's friends Henry and Hester Thrale. The famous dictionary-compiler lived off Fleet Street but during the mid-1760s paid a weekly visit to the Thrale house in the brewery yard for dinner.

"Dr Johnson had a room set aside there," says Kate. So he usually stayed the night rather than find his way back over London Bridge or the new Blackfriars Bridge.

He so loved the Borough and meeting other guests around the dining table every Thursday that he came to dread August when the Thrales went away on holiday to Brighton. Henry Thrale was the MP for Southwark and had stood on a manifesto drafted by Johnson.

But Hester did not care for Bankside, or discussing the price of hops in Borough Market. Johnson just could not understand why she preferred Mayfair and even Streatham to Southwark.

Kate recalls that when she first lived on Bankside it felt as if little had changed since Johnson's time. "This was before the building of the Millennium Bridge and opening up of the river. You could walk along and there would be no one else around. You could feel the past coming up to meet you."

Kate opens and closes her book with Mary Wollstonecraft who sought out Johnson before she lived in Southwark. Kate thinks that had he lived longer Mary would not have had his approval for her controversial books.

For her own book, Kate has chosen the portrait of Mary by John Opie who depicted her as a suddenly successful feminist writer when living in Southwark.

All the women around Samuel Johnson are revealed as mainly fiesty, far sighted and successful. The book has taken a decade of research with the author visiting all the places where the women lived.

"I enjoy going to places and trying to conjure up the spirit," says Kate when mentioning poet, translator and domestic goddess Elizabeth Carter who deliberately lived with a sea view. "I had a great time at Deal. I remember sitting on the beach and the moon came up. That is what Elizabeth Carter would have seen."

Kate Chisholm is radio critic of The Spectator. It was when writing Fanny Burney: Her Life that she first came to know Southwark.