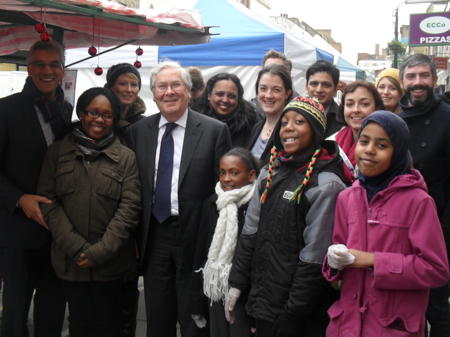 Waterloo's primary school has been part of the programmes run by the Chance to Shine charity, which promotes cricket in inner-city schools, for the past three years.

This year Johanna was the host school for National Cricket Day on 23 June and Sir Mervyn King – along with other well-known figures – came to the school to teach lessons in their specialist subjects.

As part of a maths lesson Sir Mervyn gave the then year 5 class Ł10 to invest.

The pupils bought materials and made products such as biscuits and lavender sachets which they sold at the school's summer fayre, making Ł40.

This term the same pupils – now in year 6 – have continued the business and enterprise project which culminated last week with a market stall in Lower Marsh.

In October, facilitated by the charity Impact International, a volunteer team from financial services company TIPP 24 came in and worked with groups of children to design a product/ service and deliver presentations about it.

The winning project was a biscuit/cookie project. Tipp 24 came back in November to work with the children on pricing and costing the product.

School caterer Sodexo agreed to cook the brownies and kindly donated the cost of the production and ingredients.

Westminster Artisans, the market operator for the newly revitalised Lower Marsh, donated a market stall pitch on the market for the day.

Local firm Strudel worked with the class to design a brand – Baker's Brilliant Brownies – and kindly donated their time and creativity to help promote the stall through posters, flyers and new media.

"I am very impressed by the entrepreneurial talents the pupils at Johanna Primary School have displayed in setting up this market stall," said Sir Mervyn.

"It is clear they have put a great deal of creativity, enthusiasm and energy into this project which will raise funds for the Chance to Shine charity.

"Their efforts have also generated the support of many local businesses in Waterloo, bringing together the local community to focus on a common goal."

The sale of the brownies raised more than Ł200 for the Chance to Shine charity.

"For us this has been a real example of teaching the children business and enterprise skills in a fun and creative way," says Di Morgan, principal of Johanna Primary, Oasis Academy Waterloo.

"By starting this project, Sir Mervyn King has given these children a critical insight into the world of commerce.

"We have been delighted with the way our local businesses in Waterloo have supported the project and the children have learnt many new skills which has boosted their confidence enormously.

"Chance to Shine is an excellent project and we are very pleased to give something back to the charity at Christmas time."