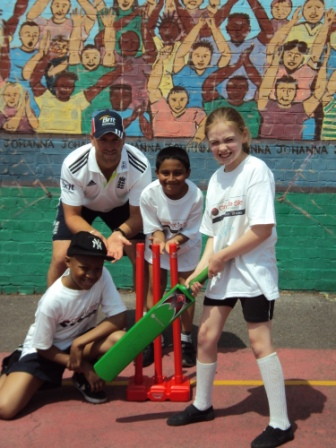 The day of cricket activity, in both the classroom and playground, was part of a national event that aims to raise awareness of 'Chance to Shine', The Cricket Foundation charity's campaign to educate two million children through cricket by 2015.

The charity has devised special cricket-themed lessons called "CricEd" to give the curriculum a cricketing twist.

Year 4 pupils at Johanna Primary took part in a cricket-themed maths lessons with Matt Prior and employee volunteers from Brit Insurance where they learned coordinates by identifying players on a cricket pitch.

The children then changed into their PE kit and headed out to the playground for a special cricket coaching session with their Chance to Shine coach Ricky Anderson and the England keeper.

Hundreds of primary and secondary schools took part in similar activity across the country and Johanna Primary School was one of The Cricket Foundation's flagship events.

"It's been great to be a part of Brit Insurance National Cricket Day at Johanna Primary and to see school children enjoying cricket in class and in the playground," said Matt Prior.

"It's been a while since I've had to work out coordinates in a maths lesson but I'd have love cricket-themed lessons when I was at school!"

Johanna Primary's Year 4 teacher and PE coordinator Paul Hazard said: "Today's been fantastic, especially because the activities have been cross-curricular. I can honestly say the cricket-themed maths lesson has been the most enjoyed by the children for a long time. They'll remember today for a while."

Pupils taking part in the activity included Aymara, 9, from Elephant & Castle who said, "It's really good to celebrate National Cricket Day. The cricket maths lesson on coordinates was fun!"

Jahmar, 9, from Bermondsey, agreed saying, "National Cricket Day is excellent. I like the cricket drills and playing in teams. We never used to do these before the coach came to school."

9-year old Jessica, also from Bermondsey, said: "The girls really tried and were as good as the boys! Cricket really helps us with team work."