A 10-storey development of student accommodation on Great Suffolk Street - likely to be run by the London School of Economics - has been given the green light by Southwark Council's planning committee. 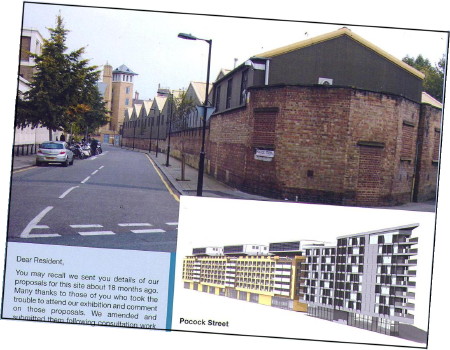 Extract from a newsletter circulated by the developers earlier this year

Instead the developer has chosen to submit a new planning application for student accommodation in buildings of a similar design to the approved residential scheme.

Mr Thomas urged the committee to back the application "to allow the regeneration of Southwark to continue" during the recession.

Although the London School of Economics has not yet signed a final deal to take on the student accommodation, the LSE's director of residential developments Christopher Kudlicki addressed the committee in support of the planning application.

The committee also heard from Cathedrals ward councillor Adele Morris who spoke on behalf of several local objectors. She criticised the increased density of the scheme – from 173 flats to 671 student units – as "one heck of an increase".

She also pointed out that residents of the new accommodation would have to walk through nearby housing estates and other quiet residential areas in order to reach local tube stations.

Cllr Morris said that the proposed development was "far too dense" and would not fit in with the character of the area.

The proposal includes improvements to the small Grotto Podiums open space on Great Suffolk Street and a new cafe and other retail/commercial units.

Other objectors include Her Majesty's Court Service who fear that the proximity of the student accommodation will interfere with the running of Blackfriars Crown Court on the other side of Pocock Street. Their agent wrote to the council: "The development is well beyond intensities that would be deemed to be acceptable for a comparable residential scheme".

During the economic downturn student accommodation and hotels are proving popular options for developers. These types of development do not trigger obligations to provide affordable housing.

Further north at the junction of Great Suffolk Street and Lavington Street Unite is currently building a 14-storey tower with 230 student bed spaces.

Another student housing operator, Hive, has planning permission for a 250-room student residence between Hatfields and Paris Garden.

Further developments of student housing are proposed at Newington Triangle and at The Quill in Weston Street.

In September the planning committee rejected an application from Goldcrest Homes to build student housing on the site between Kwik Fit and T Clarke on Walworth Road near Elephant & Castle. Goldcrest had previously received planning permission for a residential development on the same site.

On Tuesday night the planning committee voted 6 to 1 in favour of granting planning permission for the Q Developments scheme.

Mr Thomas told the committee that the current tenant of the warehouses leaves at the end of this year. Work will begin in Spring 2010 with completion due by Summer 2012.