Search back on for cultural tenant at One Tower Bridge

Berkeley Homes has launched a new search to find a cultural organisation to move into its One Tower Bridge development next to Potters Fields Park. 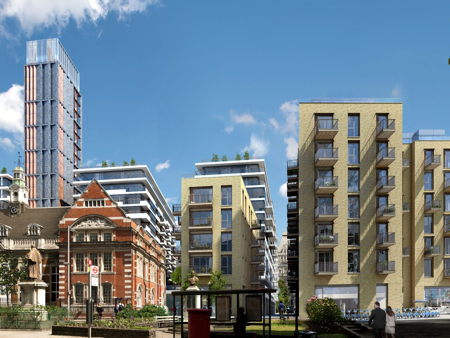 The new search process has begun four months after Southwark Council – Berkeley's joint venture partner in the scheme – abandoned its efforts to find an occupier for the cultural space in the prime riverside development.

Potential users could develop the 6,079 sq m space as a theatre, concert hall, gallery, exhibition space, visitor attraction or other cultural use. Prospective tenants must act quickly as expressions of interest are due by 6 April .

"We are 100 per cent committed to the success of One Tower Bridge, and this premium cultural facility poses a fabulous opportunity for the right organisation," says Harry Lewis, Berkeley Homes' land and planning director.

"It is a highly flexible space and we are looking forward to working closely with the successful candidate to tailor it to their specific needs."

"This is effectively a blank canvas and the possibilities are myriad. Although this is a unique site, Berkeley has a long established track record in creating highly successful mixed use developments."

The search is being led by Dan Anderson of Fourth Street who says: "We are looking for an organisation with a compelling concept, a sound business plan and evidence of funding. Whether it is an established organisation looking for a new home or a wholly new concept, we are open to all ideas.

"I hope to see proposals from both public and private sector organisations. It is a large space, so we are also open to bids from two or three organisations coming together on a concept. But we know how difficult the funding climate is at the moment and we will be scrutinising business plans very closely.

"We anticipate significant interest, and whoever eventually takes this space will be part of a world class development in an enviable location. Opportunities like this in central London are incredibly rare."

The nine blocks are named after royal houses: the first, Windsor House, is due for completion in 2014 with the second (Tudor House) expected in 2015.

The scheme is being marketed heavily to international buyers including sales exhibitions in Moscow and Kuala Lumpur but Berkeley bosses insist that they have already had lots of interest from local buyers.

Homes at One Tower Bridge will feature interiors designed by Conran and Partners and the complex will be managed by Harrods Estates.