A statue of Sir Simon Milton, a former Deputy Mayor of London who died in 2011, is to be erected in the One Tower Bridge development. 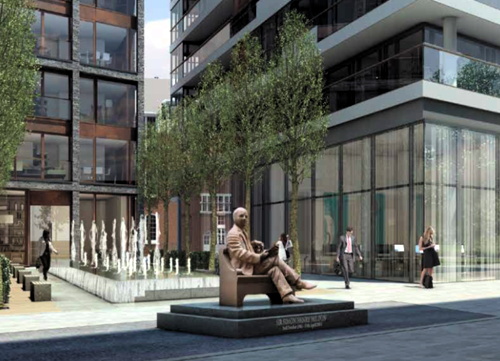 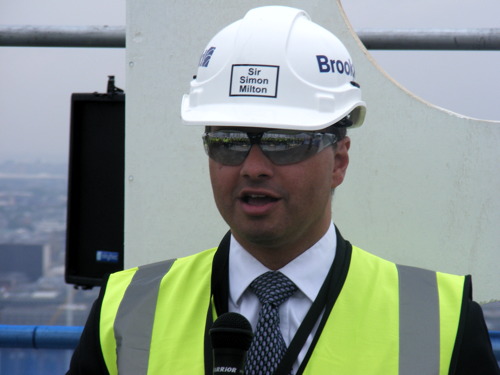 As deputy mayor, Sir Simon Milton performed the 'topping out' ceremony at the Strata SE1 tower in 2009

When the Conservative politician died suddenly in 2011 at the age of 49, City Hall's union flag was flown at half mast.

The statue at One Tower Bridge – just yards from City Hall – is the work of sculptor Philip Jackson.

Jackson also created the Terence Cuneo statue that stood at Waterloo Station for a decade until 2014.

Remarkably, the proposed statue at One Tower Bridge will be the fifth public memorial to Sir Simon in Central London.

A statue of Sir Simon Milton by Bruce Denny can be found at the Paddington Basin development. It was unveiled in 2014 by the then communities secretary Eric Pickles.

A bust of Sir Simon by Denny is displayed in the foyer of Westminster City Hall in Victoria.

Sir Simon is also immortalised in the frieze of a building in Eagle Place, Piccadilly. As well as a bust of the former council leader, the decoration includes an eclair and a slice of gateau to represent the Sharaton's Patisseries chain run by Milton's parents.

A water feature outside the Connaught hotel is also dedicated to Sir Simon's memory.

Next year, the Sir Simon Milton Westminster University Technical College is due to open next to Victoria Station.

For the One Tower Bridge statue, Berkeley Homes has asked Southwark Council to process the planning application speedily so that the artwork can be installed by the end of March.