Plans by United St Saviour's Charity to extend the mansard roof of a Georgian terrace in Park Street to create five extra homes have been vetoed by Borough & Bankside Community Council. 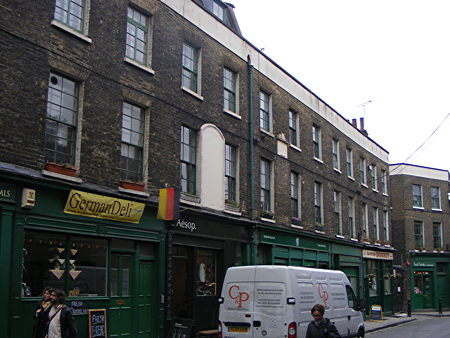 This section of Park Street has appeared in many movies 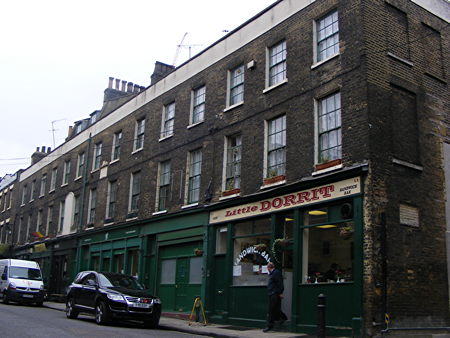 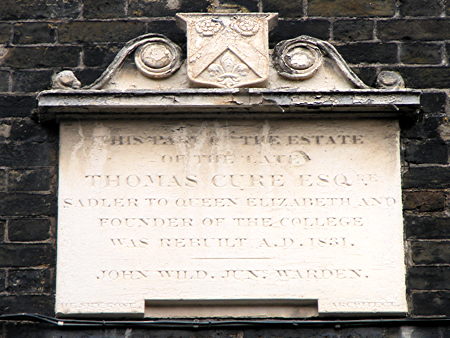 A plaque recalls that the terrace, formerly part of the estate of Thomas Cure, founder of United St Saviour's Charity, was rebuilt in 1831

United St Saviour's Charity wanted to refurbish its grade II listed terrace of houses and shops at 1-13 Park Street and add a mansard roof extension to increase the number of homes from 7 to 12.

The charity claims that the increased rental income from the extended and upgraded terrace would enable it to expand its grant-giving by 20 per cent from Ł500,000 to Ł600,000 a year.

This section of Park Street has been used as a filming locations for movies including Lock, Stock and Two Smoking Barrels, Jude, Howard's End and Entrapment.

Members of Borough & Bankside Community Council voted unanimously to reject the applications for planning permission and listed building consent at a meeting on Wednesday evening.

Introducing the application, Southwark Council planning officer Michele Sterry explained that the authority's planning department was recommending refusal on three grounds: the loss of business space, the impact on the historic buildings and the lack of cycle parking.

Conservation officer Norman Brockie said that the terrace is "almost unique within the borough" in terms of its particular character and scale.

Ms Sterry said that officers consider the proposed extension to be of a "poor quality of design". Mr Brockie added that the council had no objection to the buildings being upgraded: "There's no problem there providing it's done sensitively," he said.

The community council heard from Park Street resident Michael Challenger who lives in one of the affected properties.

He explained that the area, which has a rich history, has been adversely affected by Network Rail's Thameslink Programme which has included the demolition of more than 20 listed buildings.

"I do not consider that the benefits warrant the loss," he said. Addressing the councillors, he added: "I hope you will preserve our valuable heritage by refusing these applications."

Philip Sturrock, chairman of the United St Saviour's Charity and Warden of the Great Account, said: "We were founded in 1540 – so history is very much at our heart – and our objective is to serve the people of Southwark. We provide sheltered housing for people in Southwark and grants totalling half a million pounds to voluntary organisations.

"We own property and have an extensive portfolio in order to fund these regeneration projects."

Trustee Camilla McGibbon explained the consultation that the charity had carried out with tenants and neighbours before submitting the planning application. She said that the charity had given an undertaking to its protected tenants that it would not seek to increase their rents because of the refurbishment.

"Our aim is to preserve Park Street as a unique and special shopping street and not a street of A3 restaurants."

Ms McGibbon told the councillors that the charity considered that its proposals would enhance the character of the buildings and make them more consistent in appearance.

Mr Sturrock said that the charity would be carrying out Ł1 million of repair works on the buildings irrespective of whether permission was granted for the refurbishment and extension.

He told the meeting that the buildings have been damaged by the Network Rail construction work for the new Thameslink viaduct: "There has been extensive cracking to the properties ... so this is the right time to do the work."

Cathedrals ward Adele Morris addressed her colleagues to urge them to refuse permission for the scheme. She prefaced her remarks by expressing her admiration for the United St Saviour's Charity and its work in the area.

"I don't think this is the right proposal for that site," she said. "I'm not sure any proposal would be right for that site because [the buildings] are so well preserved."

Summing up, Cllr Claire Hickson said that she agreed with the officers' recommendation that the proposed mansard roof would be "disproportionate to the size of these buildings".

Cllr Geoffrey Thornton said that, viewed in isolation, the proposals did not look unsympathetic but the loss of so much of the original fabric of the listed buildings in such a high-profile location could not be supported.

Cllr David Noakes agreed with his colleagues and said that he didn't think a sufficient case had been made to override the concerns about the loss of the original roof of the listed terrace.

Cllr Poddy Clark, chair of the community council, said she appreciated the merits of the design of the proposed mansard roof, but like Cllr Hickson, considered it to be "out of Balance with the building as a whole".