Network Rail says it will learn lessons about the huge crowds seen at London Bridge Station on Thames Diamond Jubilee Pageant day as it prepares for the pressures of the Olympic games. 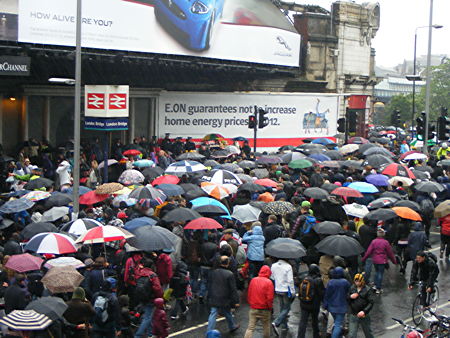 "All our other major stations have large concourse areas that have the ability to hold people and allow people to filter through the barriers.

"Our primary focus for London Bridge during the games, and last weekend, is to ensure that the station can operate in a safe manner."

He went on to describe the queueing system which was tested on Sunday 3 June and which will be used at certain times during the Olympic games.

"Because the only access to the Southeastern platforms, platforms 1 to 6, is via the very constricted subways, we have to put in a filter mechanism to split the passengers into three discrete flows," he explained.

"The first flow is for the Southern services on the Brighton main line. That worked well.

"The second flow is people who want to go to to platforms 5 and 6 which is London-bound trains and First Capital Connect. They are segregated from the dominant Southeastern flow. They go through the Southern concourse, along platform 8, across the footbridge and down. That worked OK and kept moving but it was very busy and very congested.

"The most problematic flow was ... the Southeastern. What was evident was that, from the point of view of keeping the station safe and making sure we don't have civic disorder, what we did worked.

"Did it mean that there were some lessons we needed to learn to make the customer experience better? Undoubtedly.

"There was an issue around the wayfinding and the signage because it was at eye-level so it got lost in a sea of people.

"Immediately we said we needed to resolve that. We've taken that on board – both from our own staff and the feedback we got via social media. We are going to review that and make sure that it is legible and clear."

Mr Ward told the committee that Network Rail estimates that 285,000 passengers passed through London Bridge Station on Sunday 3 June between midday and 6.30pm, compared to 160,000 on an average weekday.

He said that on Friday 27 July, when the Olympic flame passes along the Thames to Tower Bridge, similar flows of passengers into the station could occur as spectators leave the riverside.

Mr Ward revealed plans to put staff from Southwark Council, Network Rail and Transport for London into the London Underground control room at London Bridge to manage the impact of large crowds on the station and the surrounding streets.

He also revealed plans to enhance stewarding along Duke Street Hill to keep the station exits clear so that passengers queueing to enter the mainline station don't block Joiner Street or the tube station entrances and exits.

"I think we are all very relieved to hear that," said Val Shawcross, Labour London Assembly member for Lambeth and Southwark.

"Over the years I've asked a number of times about crowd management within London Bridge because on ordinary occasions there can be poor crowd management and I thought it had not been attended to properly.

"There clearly were huge crowds outside the tube entrance. They encroached massively on the road there, but of course during the Olympics it will be open to traffic."

Network Rail is also considering road closures around London Bridge on the two marathon days during the games so that there is more space for passengers.

Mr Ward also revealed that on the pageant day some trains were turned around at London Bridge rather than continuing to Charing Cross or Cannon Street in order to get passengers away from London Bridge more quickly.

"For example, on Sunday we terminated trains coming into London at London Bridge, and started them back, so they were empty trains so we could get more people on and get people away," he said.

"We will always have the ability to make those operating decisions to provide extra capacity where it's needed."

• Train operator Southeastern this week published its special timetables for the Olympic and Paralympic games period.