This weekend Network Rail began to remove bicycle racks from London Bridge Station to free up space for the extra passengers expected to use the station during this summer's Olympic and Paralympic games. 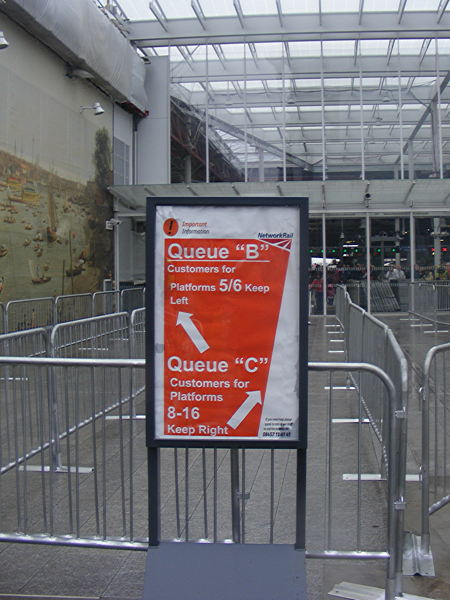 Network Rail says it's necessary to remove the bike racks to make its queueing system, seen here during the Diamond Jubilee weekend, enable the station to keep functioning during the Olympics

At present the racks on platform 8 at London Bridge have space for 60 bicycles. By Monday 9 July all the cycle racks will have been removed.

The rail infrastructure company is promising to install "new and improved cycle racks" with double the current capacity after the Paralympic Games.

"There will be a huge increase in the number of passengers using London Bridge station during the Olympic and Paralympic games," says Marion Roberts, station manager at London Bridge.

"The temporary removal of the cycle racks will help provide extra capacity to allow everyone to enter and exit the station as quickly and easily as possible.

"The new provision, which will be in place after the Paralympic Games, will provide more spaces in a safer environment. We apologise for any inconvenience caused in the meantime."

The bike racks on platform 8 will be removed just in time for a rehearsal of the queuing arrangements to be used at London Bridge during the games.

On Tuesday 10 July the station will be operating a one-way system with entry via the bus station level and exit via Joiner Street.

As part of a system to keep different groups of passengers apart, travellers arriving at London Bridge to board First Capital Connect trains and Southeastern services towards Waterloo East and Charing Cross will be funnelled via platform 8 to reach their trains via the footbridge.