Mayor of London Boris Johnson has defended the high income thresholds for eligibility for new shared-ownership homes under construction in SE1. 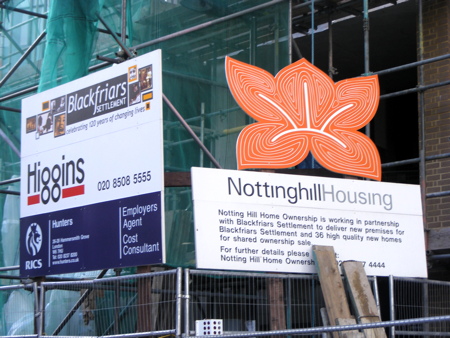 The Mayor was challenged at Wednesday's London Assembly meeting by Labour's Andrew Dismore AM who cited a recent article in the Guardian which examined shared ownership homes under construction near Blackfriars Road.

15 of the homes are subsidised by Government grant so the minimum income level to qualify for a 25 per cent share in a one-bedroom flat is Ł30,000. However, the 21 non-subsidised homes at Beacon have much higher thresholds for eligibility.

The Guardian recently covered the Beacon scheme as part of its investigation into shared ownership schemes in London.

Mr Dismore asked Boris Johnson at Mayor's Question Time on Wednesday: "When you wrote for Notting Hill Housing's First Steps website that 'this website is London's gateway to affordable home ownership', did you know that on the website, for a shared ownership 3-bedroom over-the-shops property near Guy's Hospital, the required income to qualify was Ł104,250?"

Notting Hill Housing told the Guardian that the Ł104,250 income level was quoted in error as the minimum share available is 25 per cent rather than 50 per cent and the page has since been removed from the First Buy website but the Ł104,250 figure is still shown on other property websites such as Zoopla.

Boris Johnson replied: "There are particular circumstances in London where families on quite a high combined income can nonetheless find it difficult to get onto the property ladder. I think it's important that you have a range of products."

Mr Dismore added: "How many nurses at Guy's do you think could afford one of those properties? Or indeed how many consultants?"

The Mayor responded: "This is a product offered by the Notting Hill Housing Trust. It is an exceptional product but most of the affordable homes we are building in London do not require anything like that income."

He continued: "The vast majority of our work in building affordable housing is obviously aimed at people on much lower incomes of exactly the kind that you rightly describe, and I am proud of the record of this mayoralty of building a record number of affordable homes in the last mayoral term and we think we are on course to deliver a record 100,000 affordable completions during two terms."

Mr Dismore challenged the Mayor again: "Because of your attitude towards social housing, the fact remains that your policy on affordable housing does nothing for those Londoners in desperate housing need."