The much-missed waterfall at Waterloo Millennium Green will be restored to working order next year after Lambeth Council awarded £75,000 of section 106 money from the Park Plaza Westminster Bridge development to Bankside Open Spaces Trust. 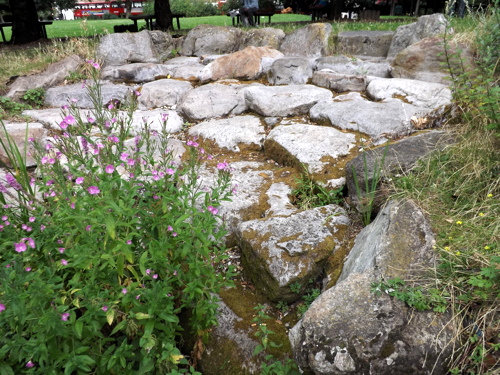 Until the pump broke down, water used to cascade down these rocks at Milllennium Green

The water feature at Waterloo Millennium Green has been out of action for many months and Bankside Open Spaces Trust, the small charity which manages the gardens, had no way of paying for the necessary work to repair the pump system.

Now Lambeth Council has come to the rescue with the award of Ł75,000 of section 106 cash from the development of the Park Plaza Westminster Bridge hotel.

"Bankside Open Spaces Trust staff and community have been working hard to secure funding for the substantial costs of revitalising the Waterloo Millenium Green's treasured water feature," said BOST in an update published on its website.

"Local people, volunteers, and our own staff have all told us how important the water feature is to them and how much they look forwards to its return.

"Unfortunately to make this happen we will have to completely build anew some complex underground engineering with specialist help."

The council has also allocated Ł75,000 for improvements to Archbishop's Park.

"I'm delighted that the remaining S106 from the One Westminster Bridge development is being allocated to the Waterloo Millennium Green and Archbishop's Park," said Cllr Sally Prentice, Lambeth's cabinet member for culture, leisure and the Olympics.

"Both parks are very popular both with local residents and people who work locally – I've eaten my sandwiches, sitting on the Millennium Green, albeit it during a summer which had rather more sunshine than our current summer.

"I'd like to thank local residents for their support for both parks and look forward to the improvements taking place next year."