A lasting tribute to Charles Dickens is to be revealed in Southwark at the climax of the author's bicentenary year. 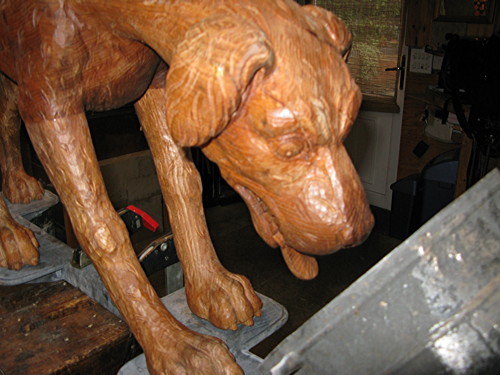 Work begins this month on the installation of a sculpture opposite Southwark Underground Station where on Wednesday 6 February next year, the eve of the writer's birthday, it is expected that a descendent of Charles Dickens will be present for the unveiling.

The artwork takes the form of a dog with his nose in a pot. The original 'dog and pot' was a shop sign in the same location, the southern corner of Blackfriars Road and Union Street, from the end of the 18th century until as recently as 1931. It is now preserved in the Cuming Museum.

Young Charles Dickens passed it daily in the 1820s on his way home from the blacking factory at Charing Cross to his Lant Street lodging. He wrote about seeing the dog above the corner ironmonger's where it stood on a bracket projected over the pavement.

Later the 'dog and pot' became a familiar logo on iron covers made in Union Street and fitted to coal holes in Southwark pavements. A coal hole replica will be placed at the base of the post holding the 'dog and pot'.

Woodcarver Michael Painter has now completed the new dog from a piece of seasoned elm.

The project is being funded by section 106 contributions from developments in the Bankside area and supported by the residents of nearby Nelson Square.

The idea for the new sculpture came from artist Jason Brooks who had researched Union Street's iron industry. Advice has been provided by tenants and residents representative Maxine Walker and Southwark historian Stephen Humphrey.

Arrangements for the ceremony will be announced in the New Year.

• Charles Dickens bicentenary events this month include the latest instalment of the Dickens News exhibition series at Southwark Cathedral and a performance of a musical called Scrooge: A Ghost of a Chance by local primary school children at St John's Waterloo.