The Wheatsheaf is back: but which is the true heir to the Stoney Street pub?

An historic pub in Stoney Street has reopened after nearly four years of closure for the construction of a new railway viaduct - but Borough now has two pubs which each claim to be the authentic heir to the Wheatsheaf name. 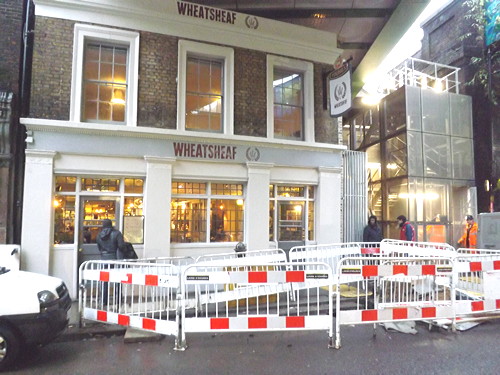 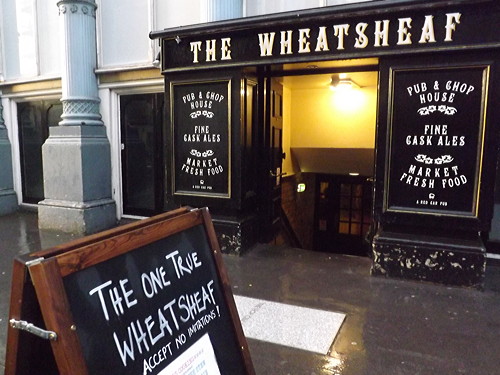 The Wheatsheaf closed its doors in January 2009 to allow the top floor of the grade II listed building to be removed for the creation of a new railway viaduct which has cut through Borough Market.

The pub is thought to have opened in the 1770s and the current building was constructed in 1840. It is part of the collection of local property owned by the historic United St Saviour's Charity.

The girders of the viaduct were installed above the pub two years ago as part of Network Rail's Thameslink Programme but no trains will run above the pub until 2018 when the remodelling of London Bridge Station is completed.

The building next to the Wheatsheaf was demolished as part of the Thameslink project and the pub has gained a small covered yard featuring an 'Eatsheaf' street food van and a screen which allows commuters to monitor train departures from London Bridge Station.

This summer a 13th century pitcher was found in a medieval pit to the rear of the Wheatsheaf site and it is planned to display it in the pub.

At the time of its closure the Young's house was managed by Red Car Pubs who set up a 'new' Wheatsheaf round the corner in the basement of the Hop Exchange in Southwark Street.

Now Young's is managing the reopened Stoney Street pub itself and Red Car is continuing to trade under the Wheatsheaf name in Southwark Street.

Red Car's chalkboard on Southwark Street describes its establishment as the "one true Wheatsheaf" and carries the slogan "accept no imitations".

The Wheatsheaf bar at the Hop Exchange is lined with portraits of regulars at the 'old' pub taken by photographer John Ross for the book he produced to mark the end of the previous era at the Stoney Street pub.