Medieval flagon on display at Wheatsheaf pub in Stoney Street

A 14th-century jug found during excavations at the Wheatsheaf pub in Borough Market has now gone on display. 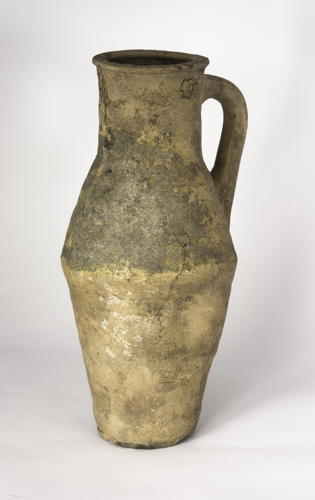 The Wheatsheaf was closed between 2009 and 2012 for the construction of a new railway viaduct across Borough Market as part of Network Rail's Thameslink Programme.

"We are delighted that the flagon is on display in The Wheatsheaf pub in Stoney Street where it was found," said Andrew Cox of Young's.

"It's apt that customers will be able to see it so close to its original home",

The jug may have been used to serve ale in the Abbot of Waverley's town house, on the site where The Wheatsheaf now stands.

"We believe from its distinctive white clay that it was made in Cheam between 1350 and 1440," said Jackie Keily, curator at the Museum of London, who gave permission for the jug to be displayed in The Wheatsheaf.

"The land on which The Wheatsheaf stands has been owned by the United St Saviour's Charity since 1584," said Philip Sturrock, chair of the charity.

"In 1746 the site was described on a map as 'the Whore's Nest'. However, in 1797 we gave a lease describing it as 'a Victualling House called or known by the Name or Sign of the Wheat Sheaf'. It has been a pub ever since."

John Hughes of Network Rail said: "It's amazing that as part of the scheme to bring the railway into the 21st century we have caught a glimpse of the 14th.

"We are proud that, in our role as custodians of the railway and its heritage, we were able to find and preserve this rare flagon."

Since the Stoney Street pub reopened in 2012 the Wheatsheaf-in-exile in Southwark Street has rebranded as The Sheaf to avoid confusion.