A previously unknown portrait of Catherine of Aragon discovered by chance at Lambeth Palace has been put on display at the National Portrait Gallery. 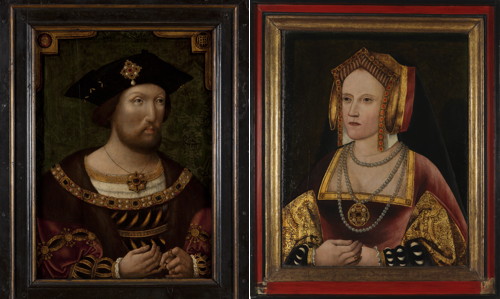 The NPG's 'Henry and Catherine Reunited' display places portraits of Henry VIII and Catherine of Aragon together for the first time in nearly 500 years.

"It is wonderful to have the opportunity to display this important early portrait of Catherine of Aragon at the gallery," said curator Dr Charlotte Bolland.

"Henry VIII and Catherine of Aragon were married for nearly twenty four years and during that time their portraits would have been displayed together in this fashion, as King and Queen of England."

The rare early portrait of Catherine of Aragon is on loan from Lambeth Palace and has been the subject of research and conservation work prior to its display.

During a research visit to Lambeth Palace, staff from the gallery's conservation and curatorial department noticed a portrait hanging in a private sitting room.

The portrait depicted a woman in costume which dated from the 1520s to 1530s. The sitter had previously been identified as Henry VIII's last wife Catherine Parr.

However, the facial features and costume shared more similarities with known works depicting Henry VIII's first wife Catherine of Aragon. The other striking element of the piece was its rare original engaged frame (a frame that was constructed around the panel support for the portrait before it was painted).

The Archbishop of Canterbury and the Church Commissioners allowed the Gallery to borrow the portrait for further research.

Examination of the painting indicated that it originally had a patterned background. Further analysis showed that it would be possible to remove the black over paint from the background to reveal the original green finish which imitates damask silk; the National Portrait Gallery's portrait of King Henry VIII c. 1520 shares a similar brocade background.

An X-ray indicated a veil attached to Catherine's headdress and it became evident that a large amount of over painting had altered the characterisation of the sitter's face. This research confirmed the re-identification of the portrait as Catherine of Aragon, and also underpinned the subsequent conservation treatment of the painting.

The portrait was compared with the NPG's painting of Henry VIII from the same period which is a similar composition. Whilst not suggesting the works originally formed a pair, the costume dates them to the same period and the works are of the same scale. It is likely that both are examples of the type of portraits of the king and queen that would have been produced in multiple versions, some of which would have been paired in this way.

• The portraits are now on public display in room 1 at the National Portrait Gallery; admission free.