Bermondsey businessman Prem Goyal visited Buckingham Palace on Friday to collect his OBE from the Prince of Wales. 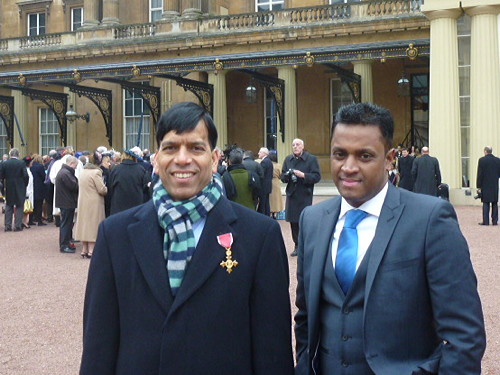 Mr Goyal, 48, was awarded an OBE in the Queen's birthday honours list last summer for services to the economy and promoting charitable giving.

The entrepreneur is an active supporter of several local charities including Time and Talents and the Tayo Situ Foundation.

Mr Goyal said: "All my efforts since moving to the UK have been focused on creating jobs and uplifting our communities. For that to be acknowledged like this, well that's just fantastic. I only want to keep doing more."

He broke with tradition in launching a public appeal for nominations for a 'community star' from Southwark to accompany him to the palace for the investiture.

"It was with the support of the community I got this award, so I really wanted to create a memorable experience for someone doing good work locally," said Mr Goyal.

Magistrate and school governor Sirajul Islam took up the invitation, even though the two men had never met before.

"It was a good experience to go inside Buckingham Palace," said Mr Islam.

"I was very proud of what Prem's achieved."