The controversy over the future of Southwark Fire Station - and 11 others threatened with closure - took a new turn when the London Fire & Emergency Planning Authority voted to defy the Mayor of London at an emergency meeting on Monday. 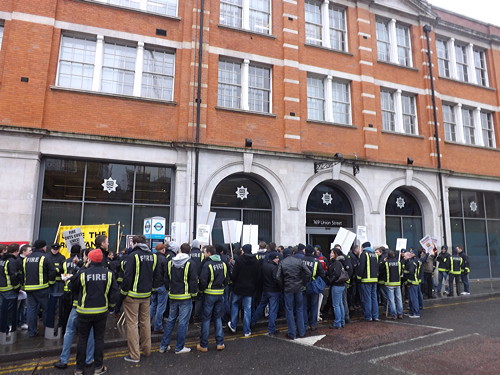 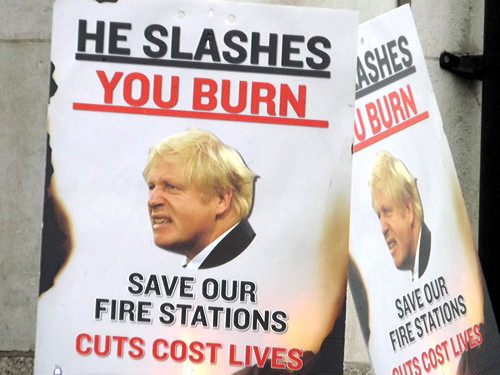 Despite the snow a small gathering of firefighters held a noisy protest in Union Street on Monday lunchtime as members of the cross-party London Fire & Emergency Planning Authority (LFEPA) gathered for an emergency meeting.

Last month the Mayor used his power of direction over the London Fire & Emergency Planning Authority to order it to carry out a public consultation on plans for fire station closures.

The authority has a Conservative chair appointed by the Mayor but the party does not have a majority.

Labour, Liberal Democrat and Green members of the authority had previously voted to strike out the station closure plans from the draft London Safety Plan.

This week members of the authority voted to ignore the Mayor's direction.

"The vote means the Mayor now has to decide whether to compel LFEPA to comply with his proposed cuts through the courts," said Labour's Navin Shah AM.

Monday's LFEPA decision follows last week's vote by the London Assembly which passed an amendment to the Mayor's budget, reversing plans to reduce council tax in favour of a freeze which would provide nearly £9.5 million to reduce the scope of cuts to police and fire services.

Lib Dem Stephen Knight AM said on Friday: “The assembly today made a choice to put protecting Londoners and the emergency services they rely on ahead of a 7p a week shaving from the council tax.

"When it comes to tackling fires every second counts and Londoners' lives are worth more than 7p a week."

The Mayor is legally obliged to consider the Assembly's amendment before producing his final budget.