The Twentieth Century Society, which campaigns to safeguard the heritage of architecture and design since 1914, has lodged a formal objection to the demolition of Sampson House on Bankside. 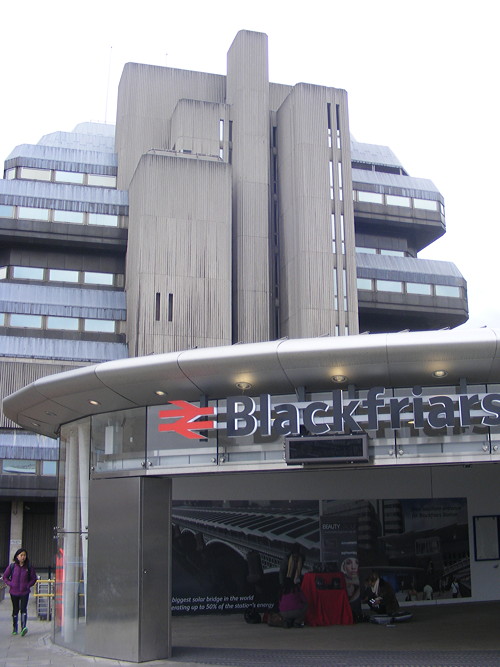 Last autumn the Carlyle Group submitted planning applications for the redevelopment of the Ludgate House and Sampson House sites near the southern end of Blackfriars Bridge.

Six new buildings are planned for the Sampson House footprint and three buildings – up to 48 storeys high – where Ludgate House currently stands.

Sampson House on Hopton Street dates from 1979 and was built for Lloyds Bank as a centralised cheque-clearing facility. It was designed to accommodate substantial computer equipment and has its own power generation facility to enable the building to operate independently of the National Grid.

"The Twentieth Century Society's view is that Sampson House is a non-designated heritage asset that deserves protection from demolition," writes senior conservation adviser Henrietta Billings in a letter to Southwark Council.

"The thoughtful combination of horizontal and vertical elements creates a building with a sculptured profile that contributes positively to the surrounding townscape.

"Overall we consider the proposals lack sufficient evidence to justify the demolition of this heritage asset, and we object to the loss of Sampson House."

Ms Billings also comments on the proposed demolition of Ludgate House, built in 1989 as the headquarters of Express Newspapers, praising the "slim and elegant form" of the building which is clad in Sardinian granite.

"Members regret the demolition of such a relatively young building constructed of such high-grade materials," she wrote. "However, the society is not raising a formal objection to the demolition of Ludgate House."

Do you think Sampson House deserves protection from demolition?