The American company redeveloping two prime sites at the southern end of Blackfriars Bridge has announced that the scheme will be known as Bankside Quarter. 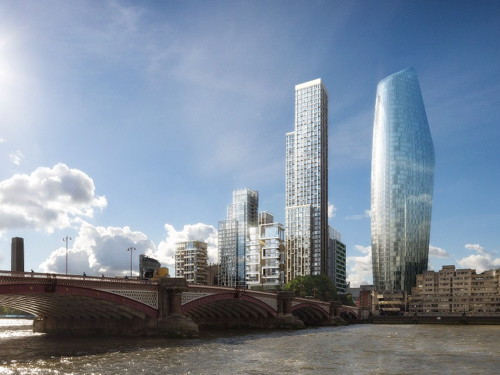 The Carlyle Group will demolish Ludgate House at the northern end of Blackfriars Road next year before turning its attention to Sampson House in Hopton Street in 2018.

"Bankside Quarter will transform the area of the South Bank around Blackfriars over the coming years, and offers a once in a lifetime opportunity to regenerate a prime, central riverside site of significant scale in London," said Mark Harris, managing director of the Carlyle Group.

"The development will be delivered in phases over a number of years, replacing the tired and inefficient existing office buildings with a vibrant, thriving mixed-use community and 489 spectacular new homes.

"Given its central riverside location, opposite the City, we believe demand for office, residential and retail space in this area will remain, strong, and that Bankside Quarter has the potential to generate substantial value for investors as the project is delivered."

Carlyle Group's proposals for the site were approved by Southwark councillors in October last year.

The company will pay the council between Ł60 million and Ł100 million in lieu of providing any affordable housing as part of the development.

Carlyle has appointed Knight Frank to identify and secure a joint venture funding partner for the scheme after receiving unsolicited enquiries from international investors in the Middle East, Asia Pacific and North America.

On Tuesday the London Assembly's planning committee heard from Observer architecture critic Rowan Moore that the emerging skyscraper clusters at Blackfriars and Vauxhall were "errors" of planning policy.