Archaeologists working at London Bridge Station have gained new insights into thousands of years of human activity in the Southwark area. 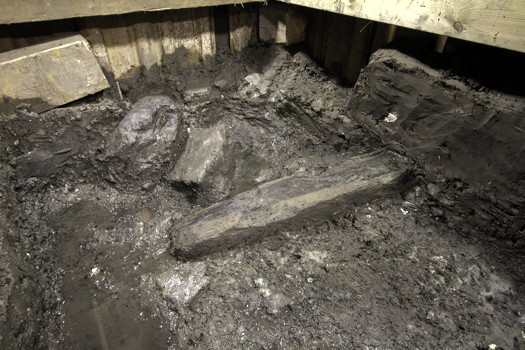 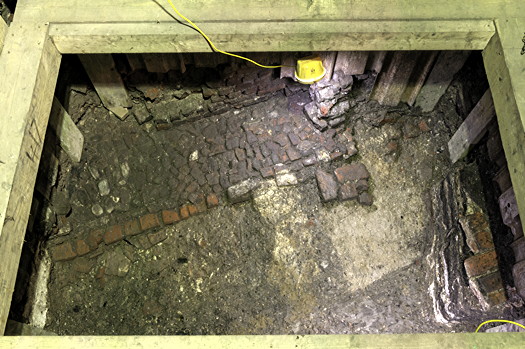 The remains of a sequence of floors and yard surfaces dating from the 16th to 18th centuries. (Strephon Duckering/OA-PCA/Network Rail) 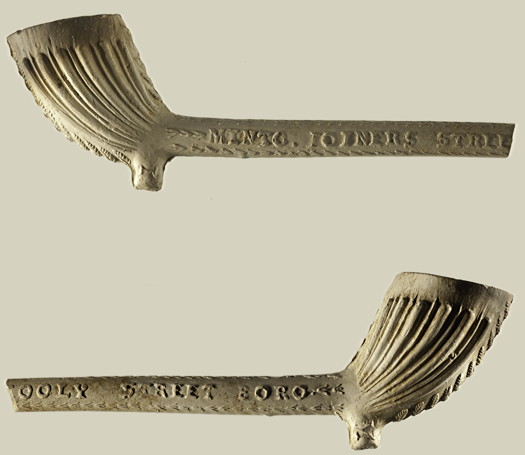 This pipe has the legends "JOINERS STREE"T and T"OOL(E)Y STREET BORO" and was made by James Minto of Tooley Street between 1809 and 1811. (Strephon Duckering/OA-PCA/Network Rail)

As Network Rail begins work on the rebuilding of London Bridge Station, archaeologists have been taking advantage of the opportunity to investigate a chunk of Southwark which has gone unexamined since the construction of the railway more than 150 years ago.

Last summer a joint team from Oxford Archaeology and Pre-Construct Archaeology set to work underneath the railway arches. Their project is just the latest element of a long-running series of archaeological investigations which have been carried out at sites along the route of the Thameslink Programme.

Network Rail archaeology manager Chris Place, who has been involved with the Thameslink Programme since 1999, estimates that 80 per cent of the Thameslink-related archaeological activity has been concentrated on the Borough Viaduct and London Bridge work sites.

"We started with geotechnical works – test pits and boreholes – under the station and along with our historical study that gave us an idea of the character of finds we might expect to encounter," said Chris Place.

"These are mainly post-medieval and later – but there are Roman and medieval remains closer to the Joiner Street part of the site. The main medieval remains might be along Bermondsey Street and along the Tooley Street frontage.

"We're now digging a series of pits in the area under the railway arches in advance of the main construction works."

It is in one of these pits – just yards from passageways used by thousands of commuters each day – where the team has discovered the remains of one of the earliest buildings in Roman Southwark. Dendrochronological analysis shows that the 17 timber piles were made from trees felled between AD 59 and AD 83.

"London Bridge Station is a very big area and it's effectively been sealed for the last 150 years so no-one has had a chance to look at it, " Chris told us.

"We've never really known exactly how the eastern edge of the Roman settlement is formed.

"It just so happens that our pit alongside Joiner Street came down on these piles which appear to be the foundations of perhaps a substantial building.

"Although it's a very small pit and we haven't looked at the details fully yet, it has certainly given us an insight into the eastern edge of the Roman settlement that has really been quite a blank for us up until now."

The works at London Bridge, when taken together with the findings of excavations along the route of the Borough Viaduct – where a Roman bath house was discovered – and on neighbouring sites such as The Place, are helping to build up a much clearer picture of Roman Southwark.

"There appears to have been some very substantial – almost opulent – Roman buildings," said Chris. "We are starting to get a feel for that part of the settlement."

The excavations at the station have confirmed that Southwark has been a busy place for a long time: "Some of the radiocarbon dates we're getting from some of the deep pieces of wood are going back into the Bronze Age, so clearly it's been an area of activity for many thousands of years."

It the quantity of timber – and its state of preservation – that has most surprised Chris during the excavations at the station.

"It just goes to show that you can never write an area off just because it has been developed continuously in recent years," he said. "The level of preservation has been quite amazing."

Some of the later finds help to give an impression of what Southwark was like before the Victorians carved up the area with the construction of the railway viaduct.

"The work we've done under the station has concentrated on the post-medieval period," said Chris. "There has been a really good range of finds which give a good insight into everyday life in that part of town.

"We have a lot of good maps of the area which show where all the buildings were, but don't tell you what went on in them – apart from the obvious things like taverns.

"We have bits of cribbage boards, tankards, pewter spoons and clay tobacco pipes which give you an idea of what life like and what people were doing; the nitty-gritty of everyday life that you don't always get from the documentary records."

Future passengers at London Bridge will be able to enjoy some of the fruits of the archaeologists' work, as a planning condition imposed on Network Rail by Southwark Council requires that an archaeological display case is installed in an accessible part of the new station.

"Certainly some of the Thameslink stuff from the Borough Viaduct did go on display almost immediately because some of the finds were considered so interesting."

The other lasting legacy from these excavations is likely to be a greater understanding of saxon and medieval Southwark.

At both Joiner Street and Bedale Street archaeologists have found traces of a large medieval ditch which is being compared with similar finds in reports of earlier excavations in the area.

"If we can start to join the dots up on this big medieval ditch it will give us a real indication of the extent and form of the settlement in the late medieval period – and it's possible that this ditch may have its origins in the saxon period," said Chris.