Roman burials have been found at an archaeological dig taking place in Dickens Square as part of the preparations for the building of an extension to the Harper Road mosque. 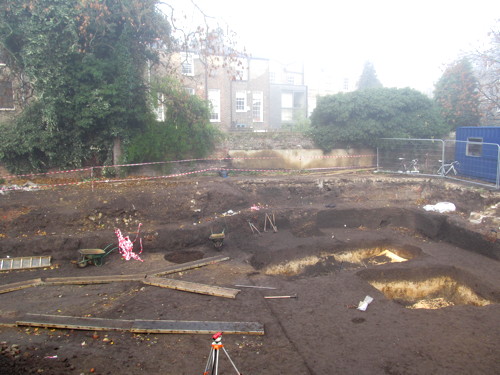 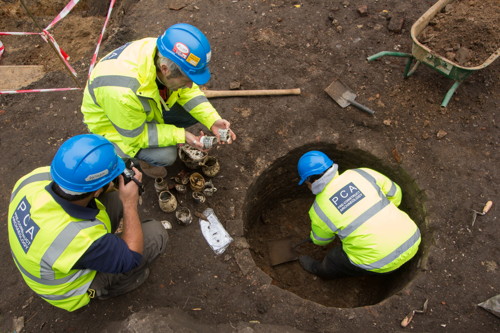 Eight volunteers from the Bait-ul-Aziz Islamic Cultural Centre have been trained to work alongside professionals from Pre-Construct Archaeology to carry out the excavation.

An archaeological investigation of the site is required to fulfil a condition of planning permission which was granted back in 2006.

As the mosque – which is still raising funds to build the proposed extension – could not afford to commission archaeological work on a normal commercial basis, it has formed a partnership with PCA and is providing assistance in kind to the archaeologists through the services of the volunteers.

This week the first Roman burials were found on the site – a discovery that did not come as a great surprise given that burials dated from the 1st to the 4th century have been discovered in recent years at digs in Trinity Street, Deverell Street and other sites in and around Harper Road.

Earlier in the month, excavation of the upper levels of the site had revealed three adult cattle skeletons dating to the late 1800s which archaeologists believe are related to the rinderpest pandemics which affected Britain in the 18th century.

Two wells gave have been revealed on the Dickens Square site, one of which contains a number of ceramic items such as cups and tableware from the late 1800s.

The mosque hopes to use the archaeological dig to forge new links with its neighbours and demonstrate that it is a centre of learning and welcome.

There are plans for an open day which will offer local residents a guided tour of the mosque as well as an opportunity to learn more about the archaeological excavations.

Posters with information about the history of the site have been installed outside the mosque and there is a blog at http://preconstruct.wordpress.com with details of the project.