Dozens of local employers this week attended a breakfast event on the South Bank to learn how they could take on apprentices in partnership with Lambeth College. 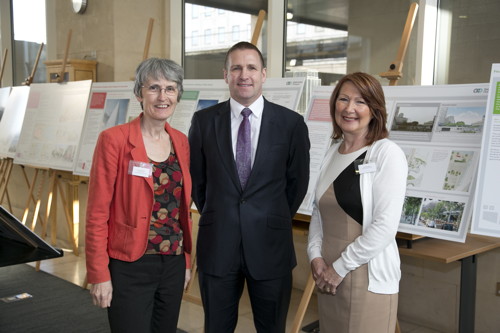 Wednesday's event was hosted at the Shell Centre by the South London Procurement Network.

The SLPN was established last autumn by the consortium of Canary Wharf Group and Qatari Diar which plans to redevelop the Shell Centre over the next decade.

The not-for-profit network helps small enterprises in Lambeth and beyond to access and bid for contracts from major businesses and projects in the area. So far 500 suppliers and 23 buyers have signed up.

She highlighted the potential of the riverside between Tower Bridge and Battersea Power Station to become "London's third central business district" – but with Lambeth having the highest number of unemployed residents of any London borough there is a long way to go.

The main presentation was given by Warren Edwards, executive development director of Lambeth College.

"Lambeth College has worked with business improvement districts to develop and deliver similar events but this is the first time we have run such an event with the South London Procurement Network," he said.

"It also offers employers a bank of work ready potential apprentices and also offers a free supported recruitment service to ensure that businesses get the right staff."

Guests at the event also learnt how to tap in to Government funding to help meet the costs of taking on an apprentice.

SLPN's Alexandra Webb said: "There is a wealth of opportunities for local employers getting involved in apprenticeship initiatives such as the one set up by Lambeth College. It is great that we have been able to get involved in this and add extra value to our SME support."

SE1-based organisations already working with Lambeth College to take on apprentices include Waterloo Community Development Group who have run a project to refurbish empty properties in the borough and make them available for rent through housing associations.