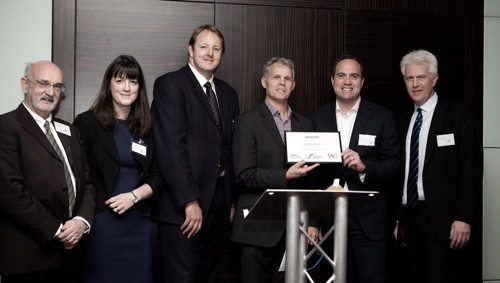 Hercules Road-based Eden Caterers won the award from Waterloo Quarter BID for its wide-ranging involvement in local projects during 2013.

The small catering company has led an initiative to encourage local businesses to take Waterloo Foodbank collection boxes into their premises for staff and visitors to donate to.

Eden uses their driver and van fleet to collect the donated goods and deliver to the foodbank for sorting and distribution to those in need.

Eden also regularly donates hot meals to overnight guests of the Robes Project which offers shelter and a meal to 24 guests in local churches and halls throughout the winter.

"A few years ago, Eden took the decision to switch the focus of most of our charity work away from big charities towards supporting more local organisations," said Hugh Walker, managing director of Eden Caterers. "What a good decision that was!"

Oasis Hub Waterloo was highly commended by the panel for its development of a broad range of services including the Waterloo Foodbank and debt advice service.

This year's Waterloo Community Award was sponsored by the South London Procurement Network, and was presented at the Waterloo Quarter BID's annual party on Thursday 5th December 2013.

The SLPN was established in 2012 by Shell Centre joint venture developers Qatari Diar and Canary Wharf Group, to boost business for companies located in South London.

"We were delighted to sponsor this year's Waterloo Community Award and were impressed with the amount of initiatives by so many different businesses already in place in Waterloo to help the local community," said procurement network manager Alexandra Webb.

Helen Santer, chief executive of Waterloo Quarter BID, added: "Our local firms are assets to the community, not just for the services they provide, but also for the excellent charitable work they undertake."