The National Theatre has announced that its new production building will be named the Max Rayne Centre in acknowledgement of his contribution to the theatre and a significant gift from the Rayne Foundation. 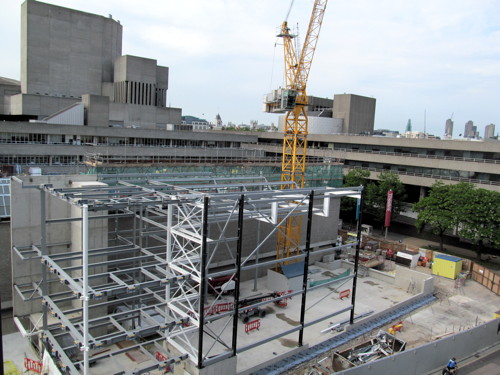 The Max Rayne Centre under construction on Upper Ground

Lord Rayne was the National Theatre's longest-serving chairman, overseeing the company for 18 years from 1971 to 1988, including its move from The Old Vic to the South Bank.

"His 18 years as chairman spanned the directorships of Laurence Olivier, Peter Hall and Richard Eyre; on leaving, he instituted a charitable NT Endowment Fund.

"We are delighted that his name will be commemorated in recognition of his immense contribution to the National, and are grateful to the Rayne Foundation for their generous gift."

The Max Rayne Centre will open in 2014 immediately behind the National Theatre on Upper Ground.

The centre is part of the NT Future scheme, allowing the National to bring together production departments currently scattered throughout the building: locating those working with modern technology such as sound, video, lighting and digital drawing, alongside the more traditional crafts of prop-making, paint, carpentry, metal-work and armoury.

It will house a new paint studio, production offices, design and project studios, with workspaces available for emerging theatre-makers associated with the NT Studio. A high-level public walkway will link this backstage world with the Dorfman Theatre foyer and the new Clore Learning Centre, twinning production and design with education and participation and offering the public an unprecedented view into the NT's production workshops.

The centre's eastern aspect will be glazed to give passers-by views of scenic artists at work, and internally the high-level walkway will end in a public viewing gallery over the new paint studio.

The original Ł70 million target has been raised to Ł80 million to absorb increased construction costs and add to the scope of the project byincreasing and improving the extent of the new landscaping around the building, redeveloping the ageing dressing room block, overhauling and updating IT systems and refurbishing the Olivier foyers and toilets.