Plans to add a total of 11 extra floors to the South Bank Tower were approved by Southwark councillors on Tuesday night. 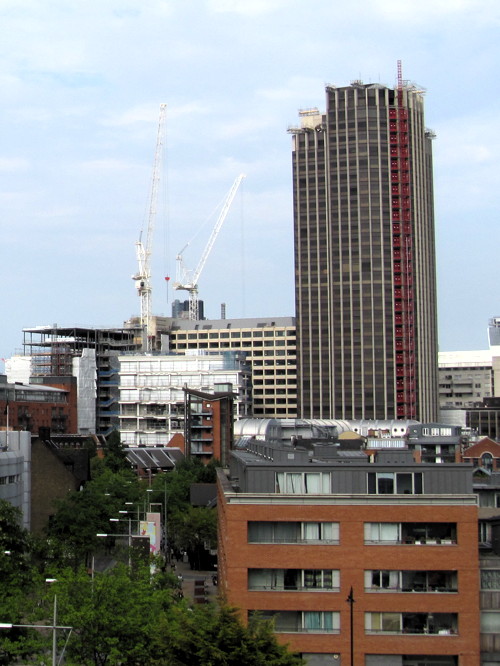 We reported last month on plans by the Saudi-backed developers of the King's Reach complex on Stamford Street to add another five floors to the already permitted six-storey extension to Richard Siefert's 1972 tower.

CIT won permission two years ago for plans to convert the former IPC Media offices into luxury apartments. Now it is seeking to add a further 18 flats to the proposed development.

The decision to approve the extra floors was was reached on Tuesday evening after just 45 minutes discussion by the planning committee.

The meeting, at Tooley Street council offices, was informed of strong objections tabled by English Heritage and Westminster City Council.

English Heritage warned that the extension would appear above the roofline of Somerset House when viewed from inside the courtyard. However, the planning officer pointed out that the roofline was already breached by the approved – but as yet unbuilt – Doon Street Tower in Upper Ground.

Westminster joined English Heritage in claiming that the tower would also harm several significant views including the one from the footbridge in St James's Park.

One Oxo Tower Wharf resident said that the extended tower would "severely disrupt the skyline, loom over local residential buildings in the area and create a more claustrophobic atmosphere".

Support for the proposal was received from the Kings Reach Flats Management company, two residents and the developers of Sea Containers House and 20 Blackfriars Road.

Southwark Council has already received a payment of Ł22 million to compensate for the absence of any on-site affordable housing in the King's Reach scheme.

Now the developers will pay an additional Ł5 million in relation to the five extra storeys.

The cash will form part of the authority's Affordable Housing Fund which will be used for new council homes across the borough.

Lib Dem members of the Labour-dominated planning committee pressed the point about the absence of a firm plan for the cash to be used for new affordable homes in the immediate vicinity of the development.

"It does not satisfy local demand or need," claimed Cllr Cathy Bowman who asked if the developers had made reasonable efforts to find a nearby location.

Cllr Nick Stanton also questioned the "rigour" with which there had been a search for a local site, or one at the Elephant & Castle, where affordable housing linked to the King's Reach scheme could be built.

A question from Cllr Mark Gettleson, who opposed the application, about where the tower's luxury flats were to be marketed was ruled out of order.