Plans to add five extra floors to the Park Plaza Riverbank hotel frontage on Albert Embankment were approved by Lambeth councillors on Tuesday night. The scheme's design has been likened to a "stealth bomber". 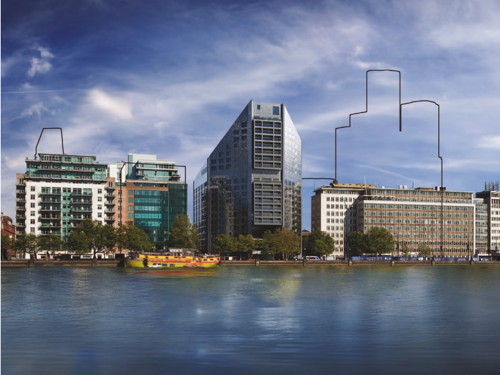 How the extended hotel will look from Millbank 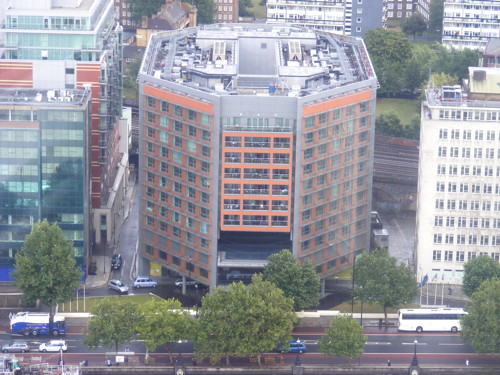 Park Plaza Riverbank as it is today

On a very hot night the Lambeth Town Hall committee room was full with every public gallery seat having been taken and many people standing in the doorway.

The scheme to expand the hotel has been designed by Squire & Partners.

"I am sure the committee will not be swayed by the fact that the Park Plaza has packed the room with its employees this evening," said Prince's ward councillor Mark Harrison who opposed the scheme.

"There is a very simple reason for rejecting this in its entirity. Twice they have tried to increase the height of this hotel and twice both this committee and the inspector have turned this down."

Cllr Harrison described the sites around the hotel as being "one of the darkest residential areas I am aware of".

An independent report was received on the scheme's effect on daylight inside flats on the north side of Salmanca Street. However, some of the findings were challenged by an expert appearing for the objectors.

Local resident Greg Shannon who said that he represented 170 objectors complained about inaccuracies in the report before the committee.

Another resident George Turner complained that planning officers did not know what the impact on daylight was from previous rejected schemes since the files were missing.

"Today council officials are again failing to uphold their duty to defend the amenity of Lambeth residents."

Michael Ball from Waterloo-based consultancy Communities & Homes in Central London Ltd (CHILL) spoke against the scheme saying that Lambeth already had the fastest growth in hotel rooms in London.

"There is no planning benefit in allowing more and more hotels," he said, adding that "the design is bizarre. It looks like a stealth bomber."

The applicants, he said, did not need this extra planning permission to be successful.

"This is a successful hotel. There are no issues of viability."

The regional general manager Greg Hegarty emphasised the new jobs aimed at local people. He said that the hotel had sheltered neighbours in times of emergency, provided room for residents' meetings and donated to local charities. He denied that the extra floors would necessitate extra deliveries.

David Morris of DP9 planning consultants, speaking in support of the application, described the architecture as being of the "highest quality" with a new public realm. He also added a reference to the local job opportunities.

The committee agreed to the plans with three votes in favour, one against and three absentions.

Later in the evening a proposal to vary an existing permission for the redevelopment of Wah Kwong House at 10 Albert Embankment, to allow for the new building to operate as an hotel rather than the agreed apart-hotel was approved despite objections from neighbours about possible kitchen smells.