The new-look Thames Festival programme was launched at a riverside reception on the South Bank last week. 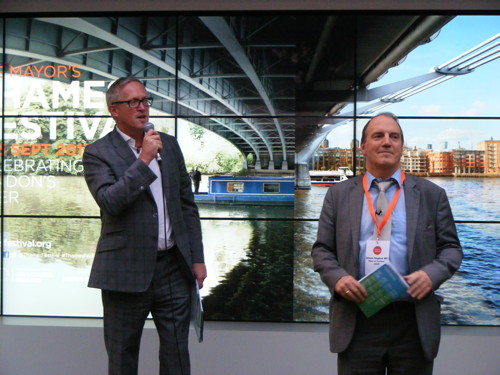 Festival chair Simon Hughes MP, who described the river as London's greatest highway, recalled that the first Thames Festival was a one-day event promoted by the late Tony Banks as an initiative of the now abolished Greater London Council.

During the launch on Thursday evening at the Samsung Site on the South Bank guests were able to view a new film about the river on a big screen whilst sitting in deck chairs. The riverside cinema near Gabriel's Wharf will be open free throughout the festival.

Speakers included participants in the Rivers of The World project partnership by the British Council which enables the festival to reach into schools in London and in 19 other countries with great rivers.

Festival director Adrian Evans said that a river relay was in progress transporting by various means a bottle of water from the source of the Thames to the estuary.

The bottle is due to pass through the Pool of London on Sunday 15 September.

"We feel that as a festival we are re-embracing the river," said the director. "We have gone back to source."

Adrian Evans announced that this year's ten-day festival was to be a prelude to the 2014 festival which will run throughout September.

The film Portrait of a River by internationally renowned Danish video artist, Nikolaj Bendix Skyum Larsen, is made of up multiple self-contained vignettes that weave together fragments and traces of the people and places that define the character of the river. Made in three parts over the past five months, this is the first time the film has been shown in its entirety.

Encouraging viewers to look again at the people and places that give the river its deceptively distinctive, deep-seated character, the latest (and final) additions to Larsen's evolving project take him further out into the estuary, and around the Thames Gateway, including scenes with boat-builders, lifeboat crews and tall ships.

"Before starting a new work I try to unlearn everything I know about the place I depict. I rediscover the place by filming a variety of clips that both touch on its poetic aspects as well as filming scenes of a more factual and personal nature. The film becomes a documentation of my way of rediscovering and experiencing the river and its communities at the time I was there with the constraints and the revelations I discovered en route."

Adrian Evans said: "Nikolaj is an amazing artist and the festival is delighted to be showing his film in its entirety for the first time. His perspective on the river is unique, and by showing the work on the Samsung screen on the walkway beside the river it celebrates, we hope that people will also be prompted to think about the Thames in a different way."

• More on The Mayor's Thames Festival.