The Blue Eyed Maid in Borough High Street could have its licence suspended for six weeks after police applied to have the pub and bar closed due to high levels of crime. 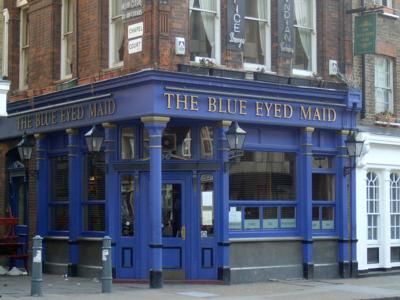 A Southwark Council licensing sub-committee this week resolved to suspend the venue's licence though the business can continue to trade for the time being while the owners consider whether to appeal the decision.

Southwark Police applied to the council this summer for a review of the premises licence with a request that the venue be closed for two months and the designated premises supervisor be replaced.

The pub – and associated Spice Lounge Indian restaurant – are located at the corner of Borough High Street and Chapel Court.

Police also claimed that the Blue Eyed Maid has the ninth highest number of reported crimes of all licensed premises in Southwark, despite its relatively small size.

On Tuesday morning the licensing sub-committee heard evidence of dozens of thefts as well as nine incidents of "serious drink-related violence" at the premises and an alleged sexual assault in the kitchen.

The violent incidents included a fight that was so severe that officers used CS spray to bring the situation under control.

"The overriding factor in all of [these cases] is the excessive consumption of alcohol," PC Ian Clements told the committee.

PC Clements also told councillors that the UK Borders Agency had raided the Blue Eyed Maid in December 2012 and detained a man who claimed to be the chef.

According to police evidence, the arrested man took police and immigration officers to a small wooden summer house on the roof of the pub which he claimed was where he lived.

There were two camp beds in the summer house and officers found two mobile phones. These were traced to reports of thefts which had taken place inside the Blue Eyed Maid itself.

In May this year a further raid was carried out by immigration officials and one of the restaurant's waiters was arrested.

PC Clements said that the police had no faith in the Blue Eyed Maid's current management and that the venue required "strong, robust and responsible" leadership.

He urged councillors to suspend the licence for two months and require the appointment of a new designated premises supervisor.

He called for staff to be given refresher training in recognising the symptoms of drunkenness.

The police also asked for the venue's opening hours to be reduced with alcohol sales ending at midnight on Thursdays, Fridays and Saturdays with an 11pm finish on other days.

The application for review was supported by Maunsell Bower Solicitors who claimed that Blue Eyed Maid customers caused noise and disturbance to their offices and drinkers had damaged the wooden frontage of their premises opposite the pub in Chapel Court.

However two nearby firms – the Kaplan business school and The Russia House – submitted written representations in favour of the Blue Eyed Maid's current management.

Barrister Guy Ladenburg, representing Mr Hussain and the current management, said: "We clearly accept that there have been difficulties at the premises."

In a highly unusual move he said that his client would be willing to accept a one-month suspension of the licence with immediate effect to allow new management to be recruited and staff to be trained.

A longer closure would be likely to trigger an appeal which would delay the process further.

Mr Ladenburg argued that a one-month closure would represent a "large financial sacrifice" for the pub's operators whereas the police's preferred option of a two-month suspension "would risk destroying the business".

Asked about the immigration raids, Mr Ladenburg said that the Blue Eyed Maid "did not knowingly give harbour" to illegal workers and described the incidents as "an unfortunate blip".

Solicitor Matthew Phipps, representing Punch Taverns, said that he did not take issue with the police's evidence and that the decision to seek the review of the licence was "perfectly legitimate".

He said that the committee hearing represented a "fork in the road" for the relationship between Punch Taverns and the pub's current tenant.

After a four-hour sitting the councillors chose to impose a six-week suspension, half way between the periods sought by the police and the business owners.

The sub-committee also imposed a condition on the venue's licence requiring the use of ID scan technology to keep a record of all customers who visit the premises.