A 16th-century painting called A Fete at Bermondsey is being displayed at the entrance to a major exhibition at the National Portrait Gallery. 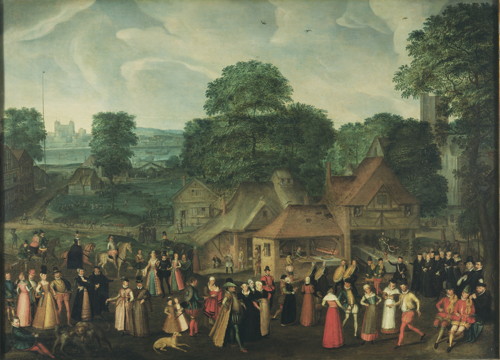 Elizabeth I & Her People explores the developments of the Elizabethan period mainly through portraits of the Queen and great figures around her.

Commenting on A Fete at Bermondsey, curator Dr Tanya Cooper said: "It is a remarkable painting because it shows all of Elizabethan life and society."

The artist, Dutchman Joris Hoefnagel, takes his viewpoint from the middle of today's Cluny Estate on the corner of Long Lane and Bermondsey Street. St Mary Magdalen Church is seen through trees to the right.

To the left, in the distance, is the Tower of London. Near Potters Fields there is a busy sawmill.

The oil painting, dated about 1569, has sometimes been known as The Marriage Feast at Bermondsey due to four figures carrying large pies which could be bridal cakes. There is also a man holding a golden vase with streamers who might appear at a wedding just like a lucky sweep.

However, there is no bride and groom.

Walking from the church is a lady in black surrounded by men in black. This group has been claimed to be the Queen and her courtiers but Dr Cooper insists that the important lady in black is not Elizabeth I.

The other figures in the painting are certainly ignoring her and instead getting ready for the party. Food is being cooked in an outhouse as a jug of wine is carried out of a door. Maybe this is the forerunner of the Bermondsey Street Festival.

There is no dog show although two dogs are fighting. A cat on a roof is looking at birds. The crowd includes rich and poor with the very well dressed mingling with local householders and musicians. A woman breast feeds her baby. Not able to join the gathering is a man in nearby stocks.

Dr Cooper says that not only did Hoefnagel use artistic licence but he may also have deliberately created an amalgam of a fete and a wedding.

The painting usually hangs at the bottom of the main staircase in Hatfield House, home of Lord Salisbury. His family has owned the painting since at least 1611 and Dr Cooper thinks that his ancestor Lord Burghley, who is depicted in the exhibition, may have commissioned the work.

Among other portraits is one of 22-year-old Joan Alleyn who grew up on Bankside. Her father Philip Henslowe had already built the Rose Theatre when she sat for her portrait in 1596. She was then the wife of Edward Alleyn who owned of the Hope Theatre in Bear Gardens.

After Joan's death in 1623, Alleyn married a daughter of Dean of St Paul's John Donne whose portrait is at the end of the exhibition.