Malaysia Eye features 38 pioneer and young Malaysian artists selected with the aim of presenting the broadest possible collection of Malaysian art in London. 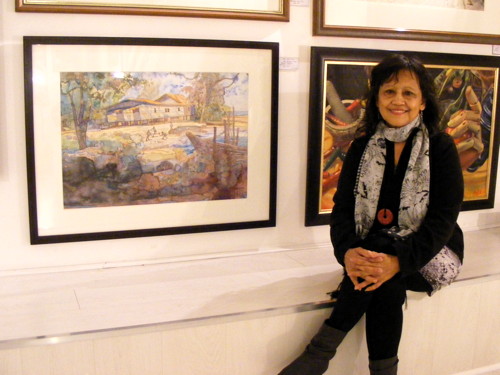 Nolia Devlin next to Makmur Jantan's watercolour My Father's Village.

The exhibition at Nolias 11 in Stamford Street is a joint initiative by Malaysia External Trade Development Corporation (MATRADE), the external trade promotion arm of Malaysia's Ministry of International Trade and Industry (MITI), and the Morne Art Gallery.

The exhibition, opened on Saturday by former Fringe Report editor John Park, showcases works both modern and traditional by Malaysian artists reflecting the country's multi-cultural and multi-ethnic background. MATRADE claim that this is the largest event of its kind to have been held by either organisation in the capital.

"We are excited about the platform as a means to promote as well as create greater awareness of the montage of talent that Malaysia has to offer to art patrons, collectors, gallery owners and supporters of the arts in the UK."

Curator Gillian Best Powell, writing in the souvenir catalogue, says: "The interesting thing is that on viewing the artworks it is impossible to classify them as being from any one part of the world.

"They hold their weight when compared with the artworks seen in other galleries in London, Paris or New York."

The show is being staged at Nolias II due to the long association of owner Nolia Devlin with the promotion of new artists and creative young people in her home area in Malaysia as well as Southwark. Her initiatives include turning a derelict shop at Langkawi into an art gallery.