Should lap dancing adverts be banned at Elephant & Castle?

Three local Labour Party council candidates have launched a petition calling for the removal of a giant advert for a chain of lap dancing clubs which is currently displayed at the Elephant & Castle roundabout. 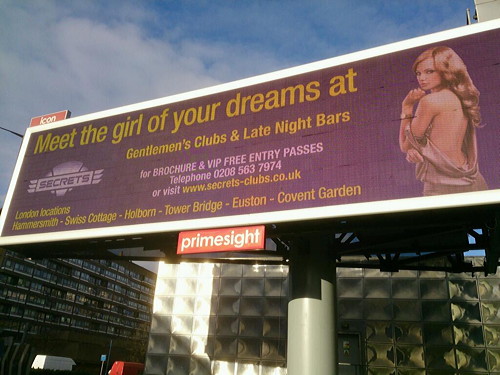 Labour candidates Vijay Luthra, Claire Maugham and Karl Eastham – who are all standing for election in Chaucer ward next May – have launched the petition together with Cllr Neil Coyle, Labour's parliamentary candidate for Bermondsey & Old Southwark.

"A huge advert for a lap dancing club has recently gone up at Elephant & Castle roundabout, featuring a giant picture of a barely-dressed woman," said the campaigners in the preamble to their online petition.

"We believe this advert is insulting, objectifying and demeaning to women. It is also right next to a major travel hub, so will be seen by thousands of children."

Southwark Council earns revenue from the billboards at Elephant & Castle which stand on council-owned land.

The petition is aimed at the billboard operator Primesight which recently received a new three-year advertisement consent from the council for LED illuminated signs at the Elephant & Castle roundabout.

The formal decision notice issued by the council's planning department includes a note that "the content of the advertisement should not be of an offensive nature, for example sexist or racist".

Previous adverts at the Elephant & Castle which have sparked controversy include a French Connection campaign in 2006 and, earlier this year, a poster for the Pussy energy drink on the side of the shopping centre.

"I find it incredible that Labour are petitioning Primesight about the advertisement at the Elephant & Castle roundabout, given that the Labour-run council owns the site and is receiving revenue from it," said Cllr Adele Morris, Lib Dem councillor for Cathedrals ward.

She added: "If Southwark Labour councillor Neil Coyle takes issue with the content of the advert shouldn't he instead be asking his own administration why they are taking money from it, and why they have allowed it to appear in one of our most prominent locations?"