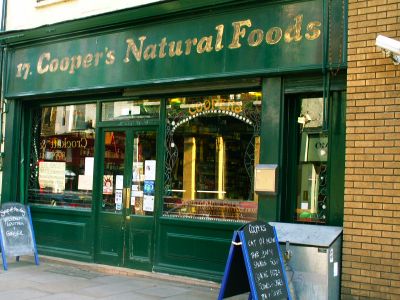 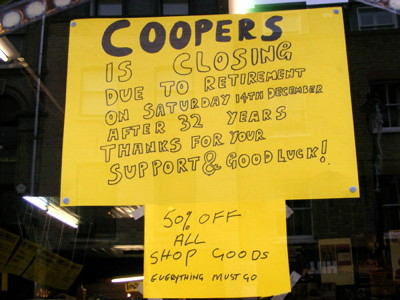 When Tim Cooper opened Cooper's Natural Foods in 1981 most of his lunchtime trade came from Greater London Council staff working at County Hall and its annexe at the end of Westminster Bridge.

There were so many stalls and vehicles that he had to make special arrangements for daytime deliveries.

The abolition of the GLC five years later was immediately felt along Lower Marsh.

"It never really recovered from that," said Tim.

"It began sliding from there. There was not a lot of local trade to support the market."

Cooper's was one of the first shops to import organic wine. Tim had visited expositions in Paris and a vineyard in Vézelay. Later the shop stocked French and English ciders.

In 2002 Harden's guide praised Cooper's as a "well-stocked" health food shop with "divine scones" in its cafe.

Tim, who has always lived above the shop, plans to move back to his childhood home town of Westcliff-on-Sea where he still has many friends.

The Cooper's building was placed on the market earlier this year with an asking price of Ł1.2 million.

This year has also seen the closure of the secondhand bookshop at 20 Lower Marsh due to the retirement of Graham and Jane Gibberd.

The Guys and Dolls hair salon closed during the summer.

New arrivals in the street include the Orso Major gallery and Tooth dentists surgery.