A train has been named the 'City of St Albans' at a ceremony held at Blackfriars Railway Station. 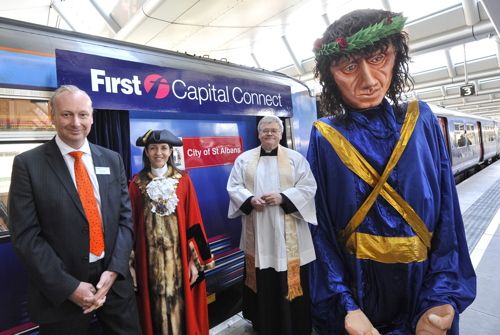 St Albans is one of the destinations served by First Capital Connect's Thameslink trains from Blackfriars.

Historians claim that it was a monk at St Albans Abbey (now the cathedral) who in 1381 developed the recipe for the original hot cross bun (the Alban bun) and distributed it to the local poor on Good Friday.

At the train-naming ceremony on Monday helpers dressed as monks handed out the buns to hungry passengers at the station.

A puppet representing St Alban was also present at the ceremony. Alban, a Roman soldier who gave his life to save a priest around the year 300 AD, is Britain's first Christian martyr.

"Like lots of clergy I am a railway enthusiast, so I am delighted that the City of St Albans is to have a train named after it," said the Very Revd Dr Jeffrey John, Dean of St Albans.

"We are extremely proud of Alban, Britain's first saint, and of our cathedral, which is the first and oldest site of Christian worship in the country.

"It is marvellous to think this train will carry our name wherever it goes – and hopefully encourage lots more people to come and visit us. God bless our train and all who travel in her!"

Until his appointment as Dean of St Albans in 2004, Dr John was a canon of Southwark Cathedral.

David Statham, managing director of First Capital Connect, said: "The city is important not only as a place from where so many commute into London but also as a destination in its own right with a rich heritage offering a wide variety of places for visitors to see.

"We are delighted to be naming one of our trains in the city's honour and hope it will encourage more people to come and visit."