A local group has called on Southwark's political parties to back the demolition of the Bricklayers Arms flyover in the run-up to next month's borough elections. 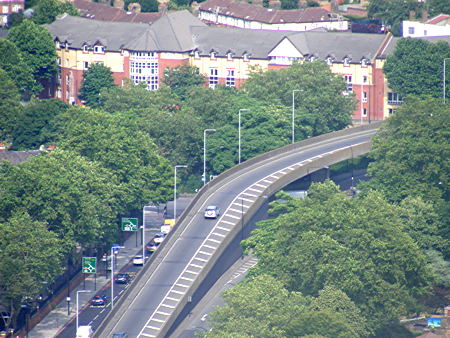 The Walworth Society has published a series of policy proposals for the area and invited local political parties to respond.

The society asks local politicians to "commit to the long-term aim of the removal of the Bricklayers Arms flyover as part of the regeneration of the Old Kent Road".

Activists claim that "the Bricklayers Arms flyover and roundabout and the northern section of the OKR (south to East St) cause enormous severance for our area and represent an extremely poor usage of now valuable land".

The society adds: "This area should be redeveloped as a more standard junction and the land liberated used for residential and commercial development and the creation of green links and parkland to unite Southwark at this point.

"There are opportunities to recreate a town/local centre in this location as existed before the flyover was constructed."

In her response to the society, Lib Dem leader Anood Al-Samerai said: "We do agree with you on the flyover being just horrible although I have always liked the rather radical idea of turning it into a park in the sky!"

Controversial planning applications for the installation of large advertising billboards around the flyover and junction were recently withdrawn.

The Bricklayers Arms flyover falls within the boundaries of the proposed Elephant & Walworth Neighbourhood Plan.