Belvedere Road on the South Bank was turned into a 'play street' by Greenpeace activists protesting outside the London offices of oil giant Shell. 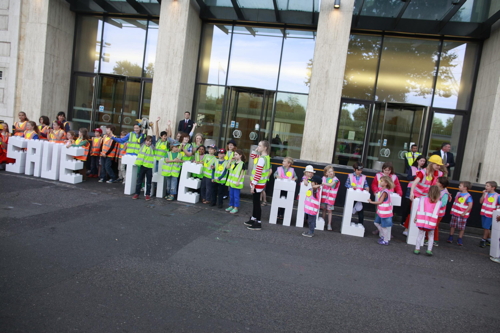 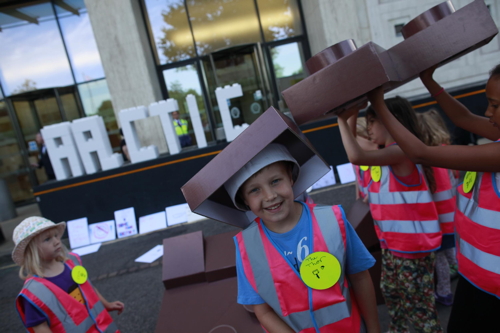 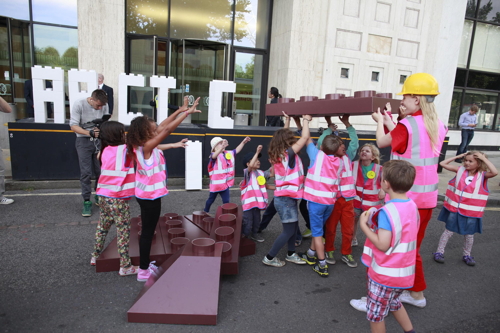 Greenpeace volunteers arrived early on Tuesday morning to block Belvedere Road to traffic ready for more than 50 children to join the protest.

The children constructed a polar bear, walrus and snowy owl reaching up to seven feet high.

The giant bricks are made from reinforced cardboard. Greenpeace says it will donate them to a local school if their campaign to end links between the toy manufacturer and the oil company is successful.

Shell's logo appears on Lego products and more than 700,000 people have signed a petition calling on Lego to sever its arrangement with the company.

"Lego's endorsement of Shell is incredibly damaging because it helps Shell hide its role in the threat to the Arctic," said Elena Polisano, Arctic campaigner at Greenpeace.

"Lego is trusted by parents and kids around the world so if Lego says Shell is OK, people believe it. But Shell is responsible for huge climate-wreaking carbon impacts and now it's determined to drill in the Arctic.

"It's a fragile environment and an oil spill would be devastating. And of course the only reason Shell can even reach the oil is because global warming is melting the ice.

"Children are leading this playful protest because global warming, and what's happening in the Arctic, is an enormous threat facing all children.

"Lego is adored by kids, and it has a responsibility to look out for them. It's unethical for Lego to partner with any company that's threatening kids' future."